The Fifth Element: The design of the Mondoshawan references the Papyrus of Ani's Henu-Barque? 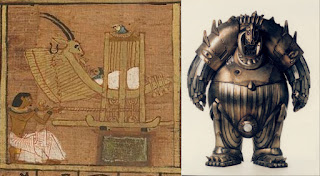 leading from
The Henu Barque trail through the 20th century.
and
The Fifth Element: The design of the Mondoshawan


a) Jacques Rey would create the final concept design for the Mondoshowan for the 1997 film "The Fifth Element". It shows signs of referencing the Henu Barque from the Papyrus of Ani, with the small head of this entity based on the antelope/oryx head?

c) Having said that, it does look as if the small animal head on the fan has been interpreted as ribcage and then the horns might become the curve leading over the top of the body on the back, and it doesn't really take much thought to have a vertical ribbing effect across the belly area, but still it fits with the vertical lines along the upper half of the three pillars.


d) Meanwhile the fan going down behind the antelope had becomes the arm of the Mondoshawan, with the small bull horns being the position of an eye like oval, and so the patterns on the lower arms instead of being horizontal strips are turned into vertical strips. Meanwhile the curve of the antelope becomes the starting points of the arms.

e) Perhaps the white light at the groin might be based on the presence of the pale pillow like forms.

f) Sylvain Despretz sat next to Jacques Rey when they were working in the Fifth Element art department/office. They were using the same reference material but Sylvain didn't notice anything to do with the Egyptian book of the dead, but still we have an Egyptian temple exterior by Jacques Rey that shows that he was exploring Egyptian themes in his work for the film.

g) If I'm to follow the idea that a Henu Barque would be far beyond Jacques Rey to know about, then someone else perhaps told him some ideas to incorporate into the image that generally turned it in the direction of being abstractly similar to the Henu Barque.