leading from
Medieval to Renaissance paintings incorporating the Henu Barque?


a) Set off by a crazy question about why Delville should have merged the Henu Barque with the Mona Lisa when painting Treasures of Satan, perhaps there is more to this.

b) To me it looks as if Leonardo Da Vinci was another person to play with the Henu Barque's configuratons, namely the type of Henu Barque found in the Papyrus of Ani

c) He turned the barge itself into the neckline of her dress, while the fan of the boat on the left become the vertical crinkles in her dress.

d) The horizontal pole with diagonal lines running along it along the pole become the upper part of the neck line of her dress.

e) He turned three support pillars into her breasts with the central one as the division between them, her face with the upper central pillar as her nose and the parting in her hair.

f) But of course the human body is divided down the centre anyway so the comparison doesn't reveal anything special there.
g) The antelope horns generally into the curve of the top of her hair and perhaps the addition of a transparent veil over her head coming down an inch before her hairline, while the small bull horns become her nose while and ear becomes her right eye.
h) Then the rudders at the far right of the barque become the three arches of the bridge.
i) She leans on an arm rest and the henu barque rests on a block.
j) The falcon head to the left of the three pillars becomes the zigzagging road and the rock above it. If there are any more comparisons to make, I'll happily list them.
k) I don't know why there should b anything to loosely compare but I'm only comparing them because it looks as if Delville saw the connections there.

m) The rope with chains become her crinkly hair draped down across her shoulders. 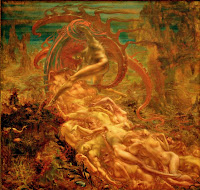