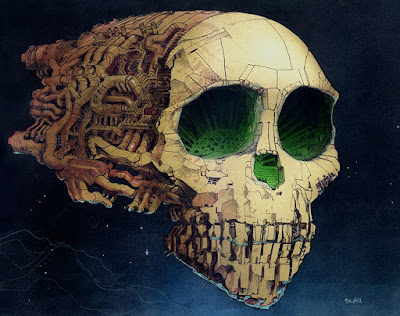 a) The complicated pipework of the skullship has pipes in groups of three that would be something familiar to fans of HR Giger's work. Giger would paint various things repeating in perhaps groups of three or four, being pipes, abstract heads, cables, tentacles, organic openings.

b) Having said that, anyone can draw latticeworks of pipes and conduits with these things grouped in three if they wanted, with different reasons and different inspirations but in terms of this design featuring mechanical mixed with something that looks organic, it becomes suggestive of being inspired by Giger.


c) However the next thing to point out is how this echoes the Cryogenic Containment Unit from both Akira the manga from 1985 and in this case I am looking at the Japanese anime movie from 1988 Japanese anime movie that caught the mind in the past, even though the sight of the floating sphere only lasts a few seconds in the movie.

But this movie would still have been on people's minds in the 1990s as a classic.

The top of the Skullship remains bare while pipes are to be found down the side, and various cylinders stuck around the surface. 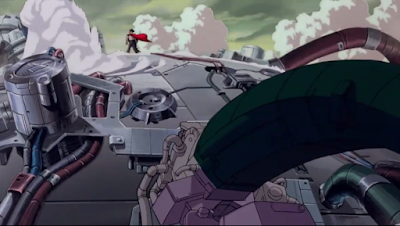 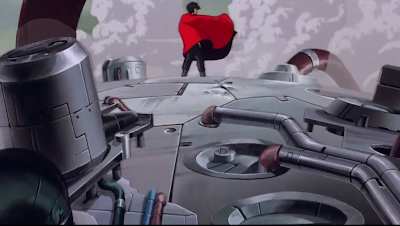 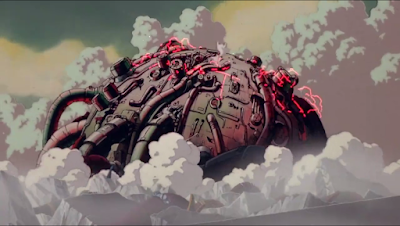 d) Perhaps also those who are familiar with the Borg sphere from Star Trek first contact might want to think about this strange looking Cryogenic Containment Unit from Akira wishing that it had more time as a floating sphere.
Posted by wmmvrrvrrmm