leading from
Herge's Tintin
and

Alien:Afterthoughts
and
Alien; Development by way of Tintin 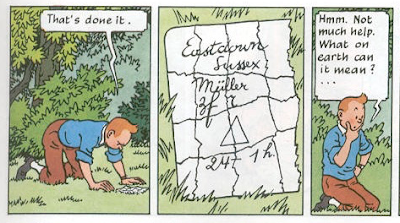 a) In Dan O'Bannon's script for Alien, they approach the remains of the dead alien pilot and discover triangle scratched into its control panel. One might think it's a strange thing that the alien pilot might have scratched the shape onto the panel even as a warning.


b) Already I had discovered that the use of the fragmented remains of a document found at the sunken wreck of the Unicorn in Red Rackham's Treasures would lead Tintin and Captain Haddock to Haddock's ancestral hall Marlinspike Hall, but still something seemed slightly missing from this.

c) Discovery of items
On Thursday June 10th 2017, I find myself looking through the comic book story "Tintin and The Black Island",

Part of the story involves looking for a plane,  and soon Tintin discovers the crashed remains of the aircraft and afterwards in the woods nearby finds a pilot's leather jacket and nearby discovers a torn up note that when assembled shows a triangle.

On May 28th 2019, I found online an image of the original version of this part of the story as published in Le Petit Vingtième 26, from 1937, where instead of just a flight jacket, Tintin finds a whole flight suit. The pieces of the letter displayed against a black background are presented as a puzzle for readers.

In the Alien script, the crashed aeroplane merged with the idea of the Unicorn shipwreck transforms into the derelict ship.


The pilot's jacket would transform into the alien space pilot remains in the derelict ship
This Triangle though is a reference to an area with three trees with red flare lights in the branches, where something was going to be dropped by a passing aircraft but merged with the document from the Unicorn shipwreck transforms into a warning about a relatively nearby pyramid building.


e) The beast of the black island

While Tintin gets caught up in an incident involving a gang of counterfeiters, and this eventually leads to a castle on the black island in Scotland rumoured to be a place where The Beast lives and devours anyone who visits the place. It turns out to be where the counterfeiters are based with their printing press down in the basement, and a large gorilla named Ranko trained to kill intruders.

In Alien, Broussard who becomes the character Kane gets caught up in an alien life cycle ritual, and gives birth to a creature that turns into a six foot tall murderous tentacled beast.