"A surrealist family has the neighbors in to tea" - Cartoon from the New Yorker 2nd January 1937 by Carl Rose references E.L. Kirchner's "Studio of Painter"?


In 1937, a cartoon about Salvador Dali's publicity stunt with the deep sea diving suit is drawn by Paul Rose for The New Yorker. Later that year, Pablo Picasso would paint Guernica which appears to borrow the general layout of the room.

a) Looking at it, one might start thinking about the character Thing that would be a part of the Addams family, but when Chas Addam drew his cartoons, he would draw thing as a half seen creature lurking in the background behind the bannisters upstairs etc. In the later TV series, it would become a disembodied hand in a white glove.

b) Although it was a very professional cartoon and elegantly drawn, with enough reason for anyone with an interest in the art world to take notice of it because of the subject matter, I wondered if there was anything more to the drawing because I had been noticing the Treasures of Satan connection going through the various artworks

c) On July 2nd, 2017,  discovered online a catalogue of artwork from a 1929 exhibition in Paris a picture by EL Kirchner that had odd qualities of something inspired by Henu Barque about it and soon I was able to work out the details that connected it it, and then realised that it must have been the thing referenced in Paul Rose's cartoon illustration, working out the comparisons as seen below. After that I suddenly noticed that Kirchner's drawing also referenced Delville's Treasures of Satan


d) Comparisons between "A surrealist family has the neighbors in to tea" - Cartoon from the New Yorker 2nd January 1937 by Carl Rose references E.L. Kirchner's  "Studio of Painter"


d.i) The curled up cat becomes ornamental feathers
d.ii) Square buttons become the grid on the side of the diving helmet

d.iii) The turkey or whatever it is being prepared has been cooked
d.iv) Ornament with two humans and lines on sofa becomes the hand chair.  The two heads of the figurines become the handles of the draw
d.v) The pipes become the curtains
d.vi ) Heads together under a cover become an eye lamp
d.vii) Pipe ribbing turns into spider web, the ladder and horse picture turns into the window with leg and crow.
d.ix) Passage into the distance turns into doorway into kitchen, chair turns into gown.
The screen decorations transform into bones in the picture on the wall 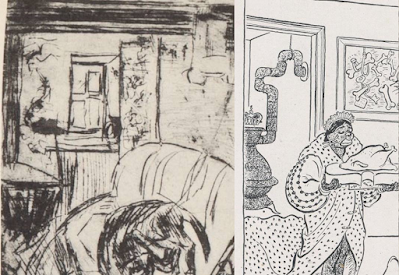