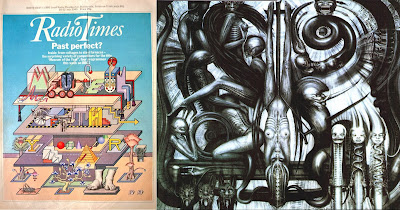 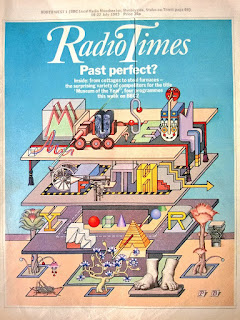 a) On the 24th July 2017, I see the cover of Radio Times cover from 16-22 July 1983 at the Radio Times Collectors on Facebook and suddenly realise the possibility that Giger had looked at it when it came out and used it s reference. I looked at the cannon wheel and suddenly made a connection with his painting Evolution Chinoise 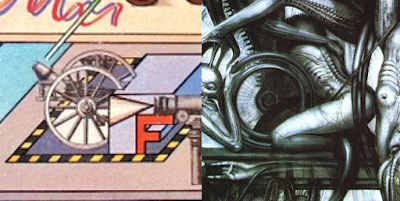 b) The cannon wheels turn into the wheelchair, and the angular form to the upper left of the F becomes the angle between he upper torso and upper leg of the figure to the right of the wheel.

c) The pyramid transforms into the two ropes extending from the female's legs into a triangular form.

d) The red face becomes the face bearing its teeth at the top.  (this we have also connected with the Queen of Hearts from another Radio Times illustration

e) There we can look at the smiling face at the bottom with a chain of circles that form its eye, cheeks and mouth, and Giger had taken half of it.