a) Sylvain Despretz's Skullship concept art for the unmade Superman Lives (1997). Appears to be loosely inspired by the Borg Sphere which would have been something that people would have been having fun thinking about at the time, and that Borg Sphere, I have decided, borrows from a well known Piranesi etching that's in this Henu Barque trail. 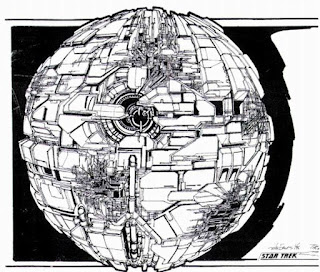 b) Appears to echo very much concept art for the Borg Sphere by John Eaves for Star Trek: First Contact, and it ought to be understandable because that artwork caught people's imagination back then, as much as the final design of the Borg Sphere. 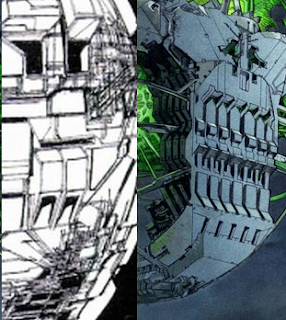 Vents become nostrils and perhaps the bright green eyes that can be seen in the full illustration. The extrusions below become replicated to become a row of teeth like forms. If Sylvain had not seen the Borg Sphere drawing himself, then it seems that someone else who was familiar perhaps told him what to draw. While it seems similar enough, of course it's a sphere. It has evolved into something different enough.