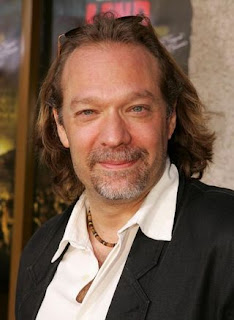 a) Officeware
Greg had various items a facehugger at his office.

He bought the original seven foot model of the Nostromo as well with the intention of restoring it, at least keeping it in a safe place until it could be restored later by Propstore.

b) Lesson from Alien
He was aware of how in the filming of the chestburster scene, the set was cleared, they brought John Hurt in and they put him in the rig, they got the set ready and then they brought the actors back in and shot it,

c) Homage to Alien
There was a shot that he stole from Alien, when a walker lifts up its head.

Greg wanted it to be like the first time the alien lifts its head up, the the viewer sees the tongue come out and is mesmerized.

Then the second walker bolts out of the pile, and so this for Greg was a homage to Ridley Scott

d) Wanting to make the Alien
He would like to work on an Alien movie, but as far as he knew that the sensibilities of Prometheus were "we've done that already, let's do something different".

It meant that he couldn't retread the same territory again, but he loved the iconic characters.

e) The alien head market
With his studio KNB FX, Greg would get involved in the alien head reproduction business.

Styles on Video Japan wanted to cast their original Fox mold pull of an original Alien head, it had all the original markers being an original production made casting, but it was missing the upper pallet and the dome.

Nicotero's studio was responsible for creating a neck sculpture which matched a casting of the original alien head in Bob Burns collection, and these forty heads would fetch thousands of dollars on the collectors market

Styles on Video Japan wanted these licensed Alien heads to be produced in America by FX artists.  Lucas Francis Studios molded the heads and Tom Killeen was brought in to help clean and paint the first twelve castings.


Due to the amount of labor needed to finish one of these heads, it was determined that it would be better to produce them overseads with the factory of someone named Fred Tang, in China. Lucas Francis Studios continued to produce the licensed heads until the China production was delivered.