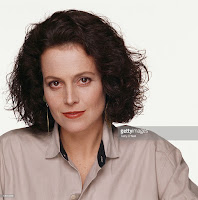 By Alien 3, Sigourney was quite keen to leave the Alien series behind, set it free and let other people discover what it was about, and so she allowed Ripley to die in Alien 3, but looking at the way Hollywood worked, the end of Ripley was never as certain as that

In 1995 she received a call "Hi Sigourney, have I got an offer for you"

"Is that you Peter?"


Perhaps she burst out laughing, and perhaps she said "Bring me back? No way. It's a nightmare."

He said, "You are going to be very surprised when we send you the script."

"Gee," replied Sigourney "I hope so."

She remained skeptical , curiously they didn't send her the script for six months and didn't give it any further thought. Later they sent her the script and she was bowled over

She appreciated the setup, that most people know that she is cloned but mistakes happen. There was also a bunch of brigands with what seemed like an unthinkable cargo. Also, now there was the fact that even if people thought they could check out permanently, now the fact was that they could be brought back by cloning. The liberty to die didn't exist and she was curious to play someone who could be brought back against her will