b) In Giger's National Park, two tentacles form a shape that Sylvain could perhaps have turned into the nasal cavity in this case, and this strange bean like form with a cross vaginal opening becomes the eye and Sylvain perhaps find himself turning this into the eye socket window.

Of course it would be easy for artists to draw some kind of a skull face, but the position matches up near enough with Giger's painting. 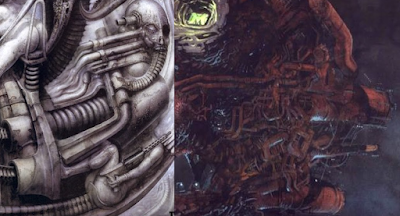