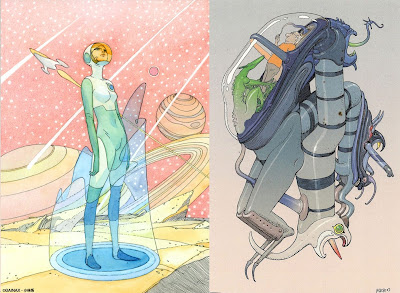 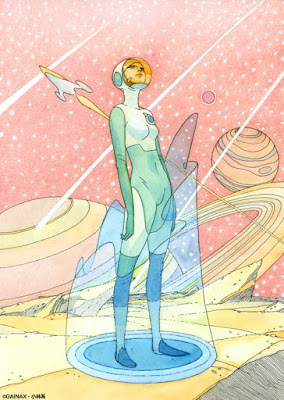 a) I realised that an unnamed drawing by Moebius from 2009 that appeared to be a merger between numerous pictures displayed shapes and forms in common with Kobayashi's work.

I can't explain why it should be so, but perhaps Moebius took note of the fact it resembled his work in some way, he was someone who had friendships with artists in the world of manga and anime in Japan such as Katsuhiro Otomo and Hayao Miyazaki what's more, it would become a piece accepted for a Gainax online display.

Do I know for a fact that it wasn't Kobayashi who saw the Moebius' illustration on this page and adapted it? I don't know for certain but the public didn't get to see this Moebius illustration until it was revealed in one of the Inside Moebius books, it was drawn in 2009 and published in 2010.

b) While there appears to be some inspiration from Moebius and the idea of Gatchaman, the colouring is very much of the artist's own style as can be seen at Kei Kobayashi's website (http://no-k.net/)

c) Comparable elements: Here I offer the elements that I think are comparable. I might wonder if perhaps Moebius had a clue about the various things that Kei Kobayashi had drawn based on what was seen in Moebius' artwork

d) The two illustrations side by side.

So the idea goes that Moebius knew about the piece of art, appreciated and integrated it into his illustration.

The space ship trail becomes the orange band of the inside of the frame going across the bubble.

The orange of the visor become the Moebius character's T-shirt.

The arm of the figure becomes the green dog like reptile. 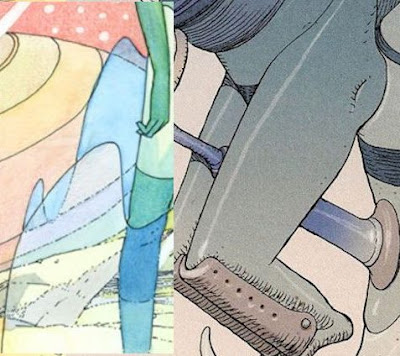 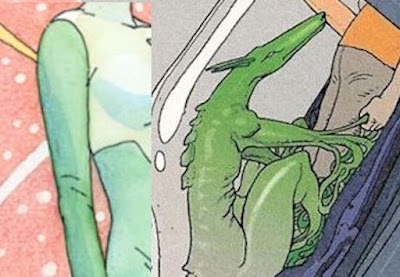 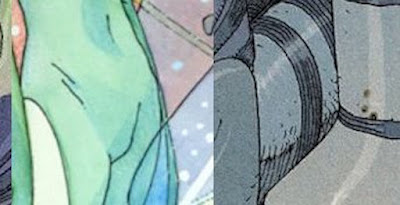 i) The feet become the tongue and beak

j) The blue glass becomes the green leg with the upper point becoming a knee. 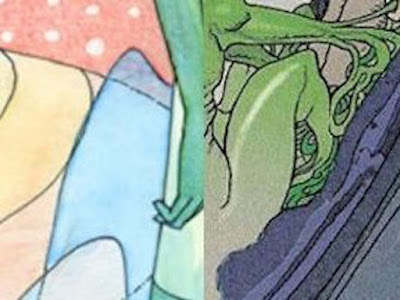 k) The bands of different shades of colour along the leg become the band along the pipe.

l) Finger of glass and tongue shaped comparable area in the Moebius' illustration which I've compared to the bull tail from the Eisenstein drawing. 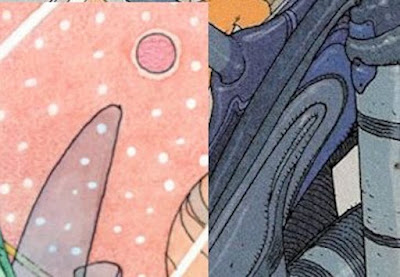 m) The rim of the platform becomes the curved tentacle.

n) Zigzag glass edge become wavy tendril pipes or whatever they are. 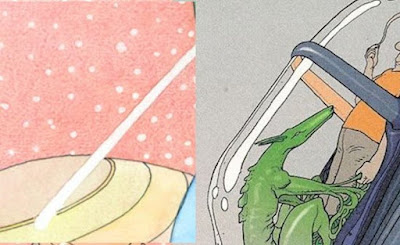 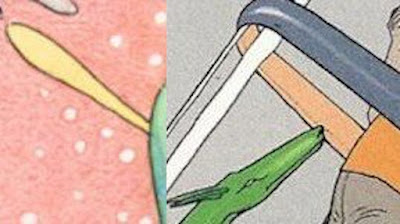