On September 29th 2016, I suddenly realised that the skull face Sylvain Despretz's skullship concept for the unmade 1997 "Superman Lives" echoed the structure of the arm from this painting of Giger's the derelict ship.

The upper triangular part of the end of the arm becomes the nasal cavity on the skull. The main trunk becomes the upper and lower teeth although Sylvain would have made it much more rounded.


On the upper part of the top fin on the tip of the arm, there's an oval shape and the outer rim of this, Sylvain has turned into a fractured sort of a bar where there would have been a left eye socket.

The horizontal pipes extending from the end of the arm to the right become transformed into a wide eye socket.

If one is familiar enough with Giger's derelict ship design,  and parts of structure of this ship got into ones mind,  one could easily find oneself feeling out the shape of such a structure in ones own artwork without realising it. 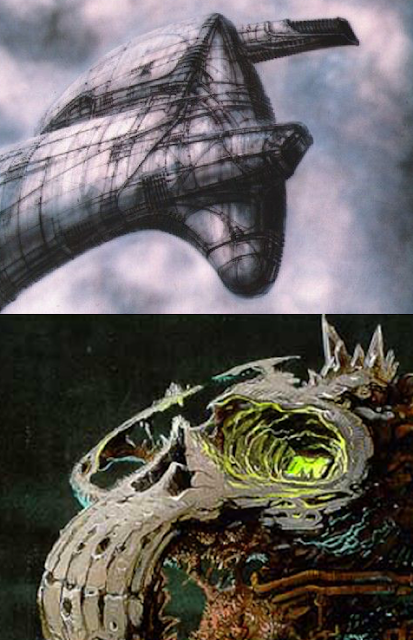