In this concept drawing for Splice that was released in 2009, it's not for me to claim that Vincenzo definitely referenced any of the images explored below, consciously or unconsciously, but his creative flow has somehow found a way to create an image that resembles a combination of these things.

I have not read about it anywhere, and might as well just accept the unlikelihood whatever might seem obvious.

At least I can see the similarities and am happy to point them out. 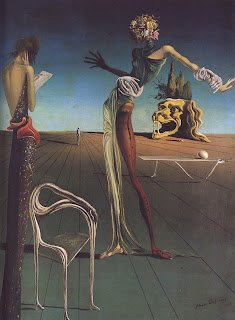 c) Human in the distance on the left becomes the centre of the wing of the mutant?

d)  Head of lion becomes the head of the mutant?

d.i) The head of the lion in Dali's painting becomes the mutant's head in Natali's drawing but facing the other way 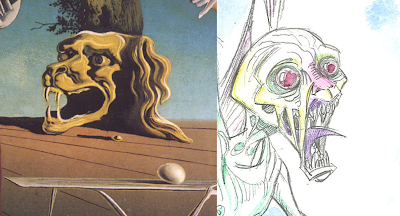 d.ii) The back of the lion's head becomes the mutant's face

The end of the mane becomes the mutant's tongue 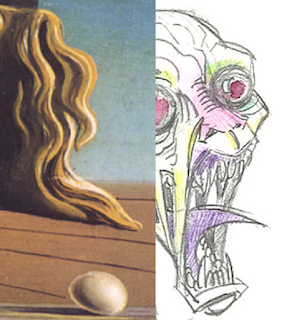 d.iii) Lion's face becomes the back of the mutant's head 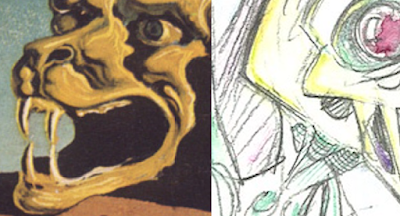 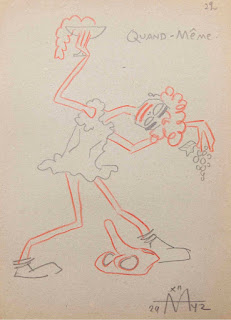 e) References "Quand Même" drawing by Sergei Eisenstein (1942) which appears to reference Salvador Dali's "Woman with the head of roses"?

As far as I can see, the drawing "Quand Même"  by Sergei Eisenstein featuring a woman partying appears to reinterpret shapes and forms from  Salvador Dali's "Woman with the head of roses" (1935).


The way that I think Vincenzo reinterpreted aspects of Dali painting is reminiscent of what Sergei Eisenstein did, which is something that I noticed was happening the early Dren concept drawing but here in a larger way, and so I might wonder if he indeed found out about the connection that seemed to be going on between Eisenstein and Dali's work. 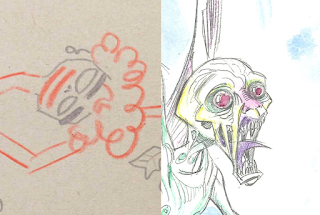 f.ii) The woman's upper eye becomes the mutant's eye on the left while? 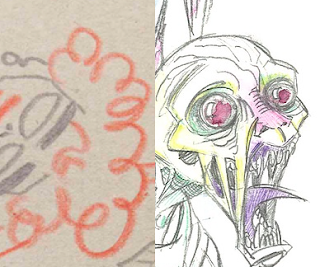 f.iii) Woman's jaw becomes the back of the mutant's skull ? 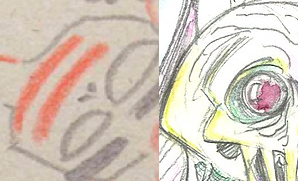 g) The long nosed mask from on the ground becomes the clawed hand of the mutant?

The long nosed mask from on the ground in Eisenstein's drawing becomes a hand of the mutant which would be the hand on the left of the two, which would for the creature be its right. 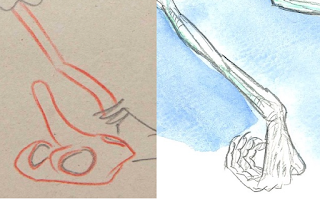 h) Comparing areas between all three

h.i) Upper part of woman reading a letter with a human standing in the distance becomes a woman's arm holding a bowl of grapes becomes a mutant's wing?

h.ii) A chair with human limbs becomes a woman's leg becomes a mutant's back leg

In Eisenstein's drawing, it looks as if foot is half out of the shoe because of the  bend at the lower part of the lower leg resembles the point where the heel ought to be, but this would become the heel part of the mutant's animal like foot in Natali's drawing 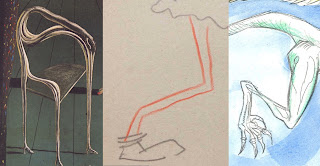 h.iii) A lion's head and egg on the table becomes a woman's head on its side becomes a mutant's head with tongue sticking out of a wide open mouth

h.iv) Woman's leg draped in fabric becomes a long nosed mask on the ground which becomes a claw like hand of a mutant

i.) References  the cover of Pink Panther #19 (which I believe references Salvador Dali's "Woman with the head of roses" (1935)? 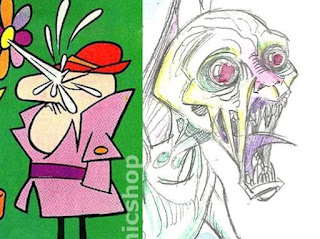 iii) Watering can and flowers integrated into the wing, etc ?
With that, the yellow of the watering can becomes the feathers at the end of the wing. There are other colours in the wings such as blue and feint pink but no red. However, perhaps the green background becomes the green glow on parts of the mutant. 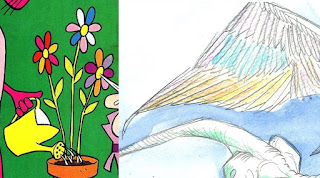