Alien: Early Ridleygram showing the underside of the facehugger from Kane's view

leading from
HR Giger's Passage Temple Entrance
and
Alien: The design of the Facehugger's sculpted underbelly
and
Ridleygrams 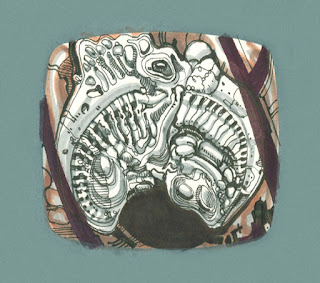 b. Evolution via detail from HR Giger's Passage Temple Entrance

b.i) Source of facehugger underbelly pattern used by Ridley Scott from Giger's Temple Passage entrance, which seems to be a strange distorted a biomechanisation Humpty Dumpty Face on
a baby's toy 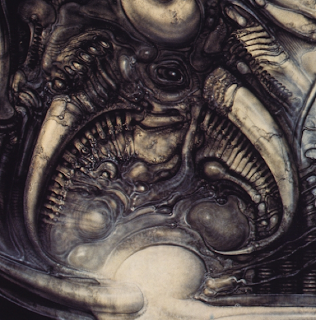 b.ii) The images side by side

c.i) Advert for Rowenta in the Radio Times on the page covering programs for 15th November 1974. It looks as if if Ridley often went to the Radio Times for inspiration although the advert might have been seen elsewhere. 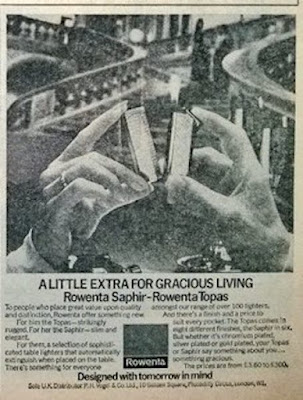 c.ii) The two images side by side. The dark space beneath the two hands crosses over into the drawing, along with the V shaped division between the who lighters. The bannisters of the stairs in the background and the fingers of the hands become merged with the idea of the already existing ribbing from Giger's painting.

d) The whole page from the Radio Times covering programs for 15th November 1974. Although I'm led to assume that Giger only started using the Radio Times from when he started work on Alien, I do accept that some illustrations had crept into his work from the publication, but I would never have thought that the Rowenta advert should be something he'd bother with, but since Ridley made a connection between the two, here we see the shape of the hands hands together and the similarity to the downward croissant shape of the deformed Humpty Dumpty face, with the fingers and hand bannisters becoming the ribbing, while the sphere along the bend of the bannisters on the left might become the nipple of the round breast like object at the top. The dark space beneath the two hands becomes the pearl white formation beneath the face. 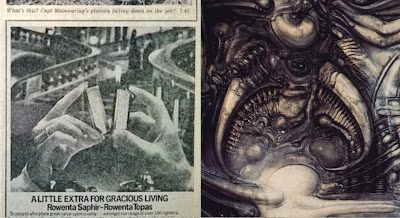