Alien: Evolution of Early Ridleygram of the rear of the space jockey seat (1978) for Alien by Ridley Scott via Dali's Autumnal Cannibalism and illustration publicising the Grand Prix movie in Radio Times from 1974? 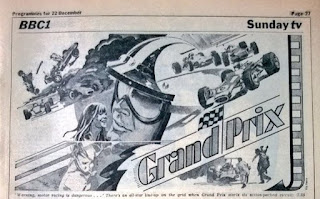 a.ii) The two images side by side.

A significant thing to point out would be the diagonal images of the racing car track and the Grand Prix title becoming the beam of light coming in from the from upper right to bottom left.

a.iii) The girl's head becomes the arm rest on the left and the goggles becomes the upper back of the seat.

a.iv) Pointing the details out further, the girls head and the nose of the man with the goggles in comparison to the equivalent areas in Ridley's drawing.

a.v) The peak of the crash helmet becomes a general curved line extending from back rest to the telescope.


b.ii) The two images side by side

b.iii) Central upper part of the painting and the back of the seat

b.iv) The interlocking heads become the upper part of the back of the chair beneath the bifurcated head rest like formation.

b.v) The lower right side of painting and the comparable area. 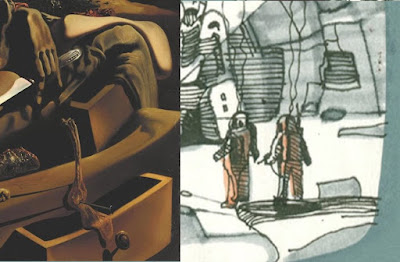 b.vi) The stocking becomes the left astronaut and the curving line beneath him 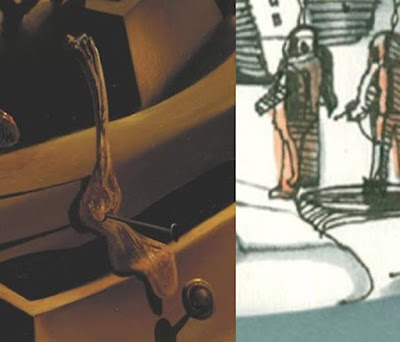 b.vii)  Flesh draped over a piece of brown cloth hanging over the side of the drawer become details on the wall. 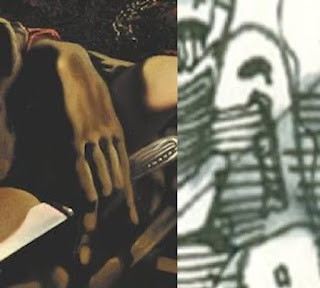 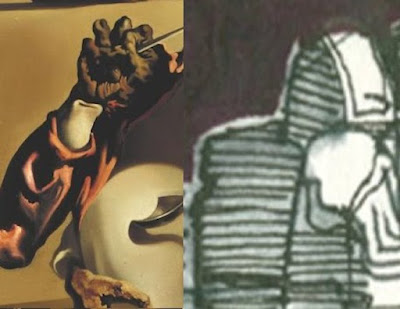 Of course the illustrator of the Grand Prix image created it with the idea of incorporating imagery from the film set in the real world rather than have a free hand at just reinterpreting a Dali painting.

c.ii)  It would be as if the flap of flesh became the racing cars, and the knife blade became the bottom of the dark curve representing the lower part of the curve of track

c.iv)  So here the hand holding the fork becomes the girl's head, rock in the background becomes the burning car smoke, while the two interlocked heads becomes the crash helmet.