Alien: Alexandre O Philippe's Memory - The Origins of Alien: Looking for a voice 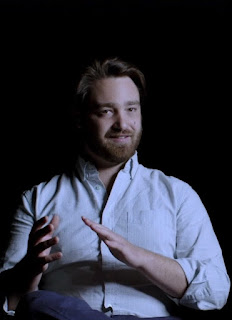 Philippe looked for a voice to craft the narrative that he was looking for with soundbites that were going to be accessible, entertaining and easy to graph.

There were many people that he interviewed for the documentary who  were too scholarly, to heady,  too dry, too difficult to deal with.
They were fascinating to talk to but but not the sort of stuff that could be communicated with a wide audience in mind

For him a real find was Will Linn the mythologist through the Joseph Campbell Foundation.
He sent them a message through their website and within 15 minutes he got a call from the head of the foundation and he said  "I got the right mythologist for you, his name is Will Linn,"

30 minutes later Philippe was on the phone to Will Linn and explained to him what this documentary project was about and whatever Linn said in response blew Philippe away.

He found Linn, a mythologist in his early thirties, who had a PhD in mythology and taught all over the place,  was able to take these huge ideas that he was dealing with for the documentary,  making them into something that was accessible and fun to connect with.
Philippe knew that this was the right way to go.