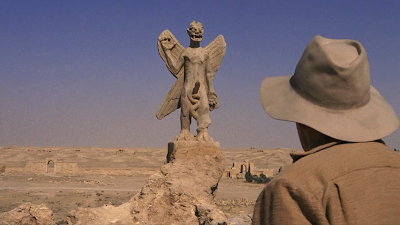 
a) A mythological creature

Philippe thought of the alien creature as completely a mythological beast, but this thing didn't come out of the blue, it tapped into mankind's myths, other stories, other images that resonated with different cultures as well, and those were the creatures that came from the unconscious.

He didn't think that one could every put the creature, which he called the Xenomorph, into a box and say "that is what it is"

b) Discussion about the the Alien beast design's origin
Perhaps he had discussions about whether the alien beast came from Pazuzu and it came from Kali, or that it comes from Bosch painting. He was actually interested in interviewing William Friedkin who made The Exorcist about Alien when Friedkin talked to him about his Hitchcock documentary 78/52, but Friedkin didn't show any interest on that subject preferring to shift their conversation to the subject of his The Exorcist movie.
c) Friedkin's point of view about Alien
He did however in the past reveal how Alien was a big surprise to him because a film that's set in the future usually did contain very much horror because one knew it was all fantasy, But he found that Ridley built the suspense so incredibly that when the viewer finally glimpsed the alien and realised how it came to be, it was shocking. It was a film that never let up and so the chest burster scene was one of the two most frightening moments in cinema with Janet Leigh's character in Psycho being the other
d) Pazuzu pursuit
Still, perhaps Friedkin's point of view on the matter of Pazuzu and the Alien beast would be of interest if he had one.
Alexandre O Philippe could see how one could see so many different mythological beings or creatures in it, Will Linn would briefly mention how one could see multiple mythological characters in the creature such as Sekhmet, Pazuzu, Kali, but he didn't mention exactly in what way, but he said that it was a synthesis that wasn't done consciously, but happened in the cauldron of stories
One could take a look at Giger's Alien and how it resembled a sort of Pazuzu. Note how the backpipes could represent its four wings which they were sometimes referred to as by Giger who seemed stuck for a name for them, and during production for scenes where the alien beast was hanging up in the landing leg room,  the long tail would be plugged into the groin as it if were a long male appendage,  and we could see how the Pazuzu statue's maile appendage stuck out in a noticebale way in the movie The Exorcist. It also has ferocious set of teeth. In the final design for the Alien beast, it's cheeks resemble Pazuzu's bifurcated cheeks.
Nothing was said about the Sekhmet comparison although I worked out that Necronom IV had shoulders reminiscent of the ancient Egyptian images of lions. I didn't understand the comparison to Kali either but one could compare the Alien Queen from Aliens perhaps to that goddesss because of the multiple arms
In the documentary voice of an English man would point out could see the medieval dragon, the Renaissance demons, the work of Hieronymous Bosch,  but nothing was shown to point out any real comparison.
Philippe would state that one wouldn't necessarily see it and go "Oh, this is Pazuzu, this is a Renaissance demon," but still I can point out the obvious similarities to Pazuzu. I'll even refer to the alien beast as a Post-Modern Pazuzu. It's as if he briefly read my blog, thought that he was reading a common fan assumption, half liked the idea as an Exorcist fan, and half chucked it away, but didn't know that they were trampling all over my theory. Or have people been actually come up with the idea by themselves without my help or without reading any fragment of a link to something I had written about the matter through Google relating to what I had to say about it. I've had to be verbally kicked in the face by a personal friend of Giger's for sharing such an assumpting online and years later it comes up as a fragment of a thought in this documentary! I would enjoy the experience of any sort of firm discussion about it but I am someone too easily ignored and perhaps there aren't people who can have a firm discussion about this subject on Giger's work. My basic assumption that Giger was an Exorcist fan like many people and signs of that turn up in his painting.
See: HR Giger's Necronom IX (1976)
See: The Pazuzu in the Exorcist compared to the adult Alien.
See: Development of Alien by way of small Pazuzu head relic from the Exorcist
e) Out of the cauldron
Then again the alien beast was also very much a creature of its own, it has become it's own myth, living in our collective imagination as a modern myth,
With that, Philippe repeating words used by Will Linn felt that the beast was actually all these different things that could be recognised

It was a creature that comes from the cauldron of imagination or of stories that was Giger’s.

He thought of the designs as something that came from Giger's dreams and nightmares, his unconscious and unconscious, (Although of course I should add that the sort of sleeping dreams and nightmares that Giger was aware of having didn't really result in such things as his Alien beast design, but his daydreams would have been another matter)