The director Jean-Pierre Jeunet would joke that since he was French, he wanted something sexy in the movie.

Where would this sort of enthusiasm lead in the movie?

This appeared to inspire moments of strange sexiness in the film 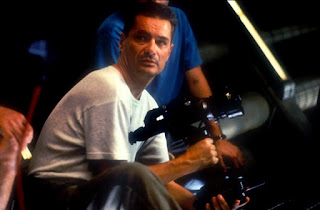 b) Moaning orgasms of sex from a foot massage

As The Betty heads towards the Auriga, he had a scene where the Hillard the co-pilot played by Kim Flowers appears to be in a scene of passion with Elgyn who is the captain of the ship.

Her face is seen in the throws of orgasm, and the camera moves across the back of her body, past her shapely buttocks and up to her feet which are being massaged by Elgyn.

c) "She is severely fuckable, aint she"

Elgyn the captain of the Betty is having a private meeting with General Perez to receive payment, and then it gets to the point where they find themselves talking about the young female character Call played by Winona Ryder

General Perez aboard the Auriga asks "Who's the new filly you got on board then?"

"She makes an impression" Perez continues

Elgyn chuckles with a big grin says "She is severely fuckable, aint she"

d) "You know I can not lay off the tall ones"

d.i) Right from the beginning when the character Johner, the toughest brute of the Betty crew, first encounters the Ripley clone playing basket ball.

He wants to play ball, although he basically he is seeking sex with her.

He comes up to her and says "How about a little one on one, what do you say?"

As he reaches for the ball, she pulls it away
"You've got some moves on you girl"

Perhaps she is toying with him as she holds her arms out holding the ball, and he inhales her
"Now if you don't want to play some basket ball, I know some other indoor sports" 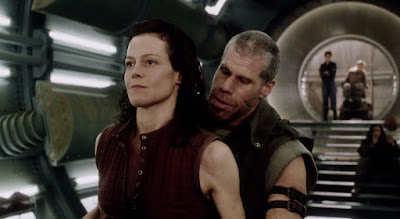 He then gets behind and inhales her saying "Come on now, give me the ball"

However Ripley throws the ball down, it bounces, hits his crotch.

What exactly is she?

d.ii) Later in the film, the Ripley clone encounters the crew of The Betty in a corridor, she asks "Who do I have to fuck to get off this boat?"

Johner who's facing the wall replies "I can get you off,  Maybe not the boat" 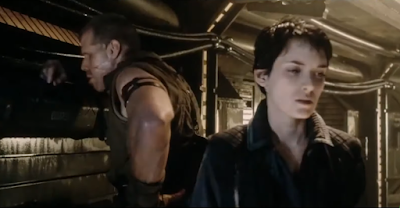 There is a scene where as Call is about to stab the Ripley clone, she has her hand on Call's face, and rubs her face on her cheek, it might even have been near enough like Brad Pitt and Antionio Banderas in their faux-kiss moment in Interview with a Vampire (1994)

It was perhaps the thing that was enough for the French magazine L'Express reported "The story of a loving relationship between a cloness and an android which suggests that it will end under covers " while L'évènement stated "Film Lesbien". 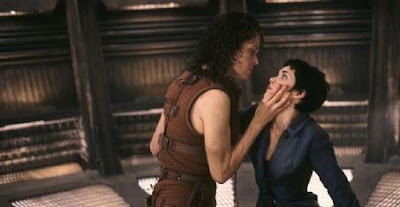 Sigourney Weaver as the Ripley clone enters a landscape of alien parts with various tentacles and protuberances, where her character is to be sucked down into a central spincter.

Indeed for her a Hieronymous Bosch like nightmare, and a scene that brought out an aspect of their perverse interests.

When she opens her slime encrusted eyes and sees the beaming faces of puppeteers, somehow a tail always ended up between her legs.

Of course they knew altogether that they were trying to deliberately tread that line while seeing the humour in what they were doing.

"Who's on that particular tail?" she asks

"I am" replies Alex

"You're a sick puppy" she replies

With that, he instructed another member of the team to be more intimate with Sigourney's body

"This is difficult for me," says the puppeteer. "I'm married."

"Nice guys," says Alec, turning to me," need to be pushed to perversion"


g) Making out with the Alien newborn

There was a scene where the Newborn would, as it were, 'make out' with Ripley.

Sigourney was a daring actress, now fueled with Cronenbergundian enthusiasm , both she and Jean-Pierre wanted to disturb the Fox executives.

There was an issue regarding the Newborn's genitalia and that Jean-Pierre would joke that since he was French, he wanted something sexy in the movie.

Sigourney in particular was in favour of going further with the sexual attraction between the Newborn and Ripley, to the point where the creature would require articulated genitalia.

This Newborn had a gliding tongue that they would control and there were several takes where they had to get it right in Sigourney's mouth. 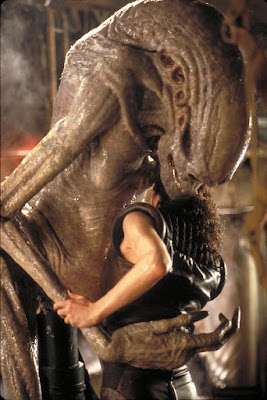 Together with that, there was also an articulated erection that they built for the creature.

ADI built them as a combination of male and female organs, they wanted to be a little vague about what sex the creature was.

It disengaged from the vaginal canal and came out. Perhaps it was Tom Rothman who said in response "We're not having a fucking boner in an Alien movie!"

So, in the end, the genitals wouldn't be seen, they shot around them and because of the creature's height, there would be a lot of shooting over its shoulder, and in some cases, they would have to digitally remove the genitals.

The digital genital removal in Alien Resurrection was surely a first.

See: Sex with the Alien newborn