a) MPC start on the Neomorphs


a.i) Levallois' neomorph
Stephan Levallois first idea for a Neomorph  showed up as a sketch of a humanoid creature with a very lean body, a head with a long spike as the back, and arms that appeared to look like featherless bird wings. His idea was to give it translucent skin with cracks in it and a very lean body. 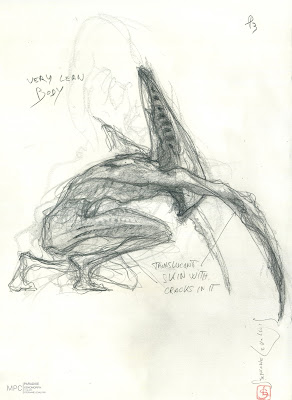 Wednesday 17th June 2015
The first day that MPC worked on ideas for the project, and it was still called Paradise.

As part of MPC, Leandre Lagrange was involved quite early in their concept work.

The original brief for the Neomorph was very vague, they were told that  "it's going to be more organic", rather than biomechanical.

On the first day, they spent their time just exploring and trying different things.

People could start off with their most crazy ideas to let themselves loose while they were not really sure which direction they were supposed to be going.

What Lagrange found himself dealing with was something that was a merger between the idea of the "xenomorph" and the facehugger. Also, the beast didn't specifically have to be bipedal either, and the idea would soon evolve into something like a weird spider.

On the first day of the project, it was a crazy day for Legrange, they had to come up with everything they could think of and try to come up with crazy ideas, but this was his early Neomorph, but they didn't know which direction it was supposed to go.

So the plan was to explore the facehugger form, and so on, it needed to be more organic than biomechanical, they were trying things and play with things, they look for inspiration in things in nature that related to it, mixing things and after that it was free sketching

b) Facehugger/Xenomorph infusion
Lagrange's creature infused the face hugger and the 'xenomorph'.
He tried to see how it would spread on the ground and occupy space like a spider, with higher legs and perhaps wider legs

Another one of these designs appeared to have pincers


As they did these sketchy creatures, they had a chat with Charlie Henley the VFX supervisor , he used to work for MPC and then moved onto the client side, so that he was overall VFX supervison.

He asked them to provide all the digital sculptures and so the prop department printed them out on 3D printers and put them in the actual set.

Lagrange pulled out out shapes on Dynamesh, which was easy for him to use, it was like starting from a ball of clay. He could take even the legs,  put one on, pull it off, and put it somewhere else before remeshing it together. It was all straiggt forwards, and Z-Brush was wonderful for that type of job because the sculptor could go straight into lighting scenarios and balance of the object

As his work bled into the following day, Legrange developed another crazy idea that was a sort of a Xenomorph with a tail perhaps inspired by the Alien Queen fetus from Alien 3.

Perhaps the design seemed like something from a crazy cartoon, but it helped explore the idea of something with a body that for sure didn't look like a man in a suit.

Lagrange had a go with the Xenomorph. Here was an attempt to make it resemble anything but a man in a suit, getting rid of all human structure while it was still to remain bipedal 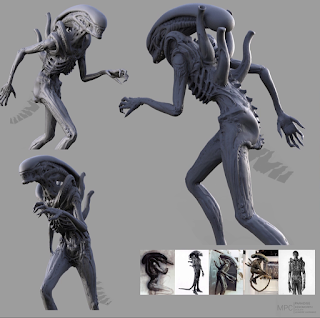 Legrange worked on a much more typical alien in running motion, but thin enough to not resemble a human in a suit too much

Ridley was saying that they should keep the xenomorph design, because they didn't want to get rid of it, but to have it thinned down a bit.

"What about we maker her thinner and what would that look like?"

So they would go through the art director, they submitted all of their images and it would go through MPC to Charline Henley the FX Supervisor, and he would bring them to Ridley. They talked it over, Charlie would come to Ferren Domenech was the VFX supervisor for that group, they would talk it through and come back to the rest of the people in the department

In Pre-Production on films very early in the process, they tended to have access to the directors, but in terms of Ridley Scott, Lagrange crossed his path in the hallways once and that was about it, so it was rare to meet those sorts of directors


d) Abstract cartoon xenomorph
Saturday 28th June 2015
By this time, Legrange's exploration into this sort of an abstract cartoon like evolved into the upper part of a much more serious looking creature.


Meanwhile at this point, Stephane Levallois continued sketching a variety of different life forms to be found on the mysterious planet.