a)  Predator 2 storyboard for the skull trophy display

AVP Galaxy uploaded the Predator 2 shooting dossier on November 21st 2020, and this was one of the storyboards featured. 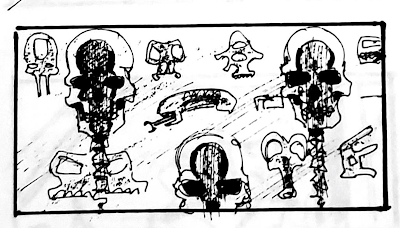 Because I realised that the final skull trophy display in the Predator 2 film was loosely based upon Giger's Anima Mia environment, (see: Predator 2 : Chiquita (Work 190) (1972) by HR Giger referenced in storyboard for the skull trophy display?) I looked for another of Giger's environment that this storyboard would have been based upon and Chiquita matched up most of all.

Obviously it was a case of expecting the artist to look at Giger's painting and see things in there with the imagination, expecting to see faces etc.
Organic shapes and figures can be seen and I suppose Giger abstractly incorporated large skulls into the picture merged with other organic forms.
If one tried to fit all the images from the storyboard into their corresponding areas in Giger's painting, they would not so easily fit and some images would overlap somewhat while the large skulls would have to be made smaller 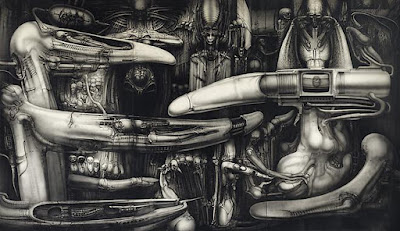 c.i) The Left side 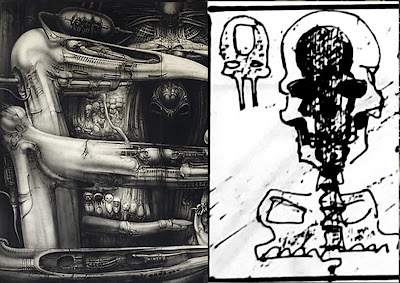 c.ii) The dark space  becomes the dark area of the skull 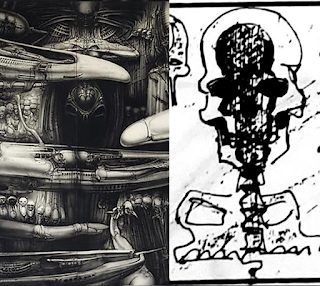 The row of small animal like characters and heads would appear to be like a deformed row of teeth and that might become the teeth for the wide skull on the lower left of the drawing. 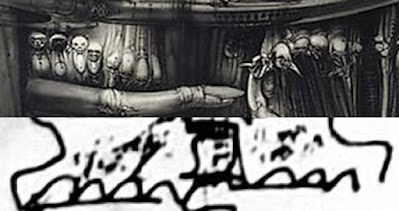 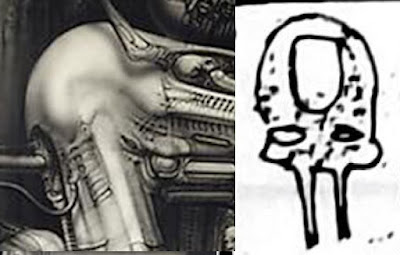 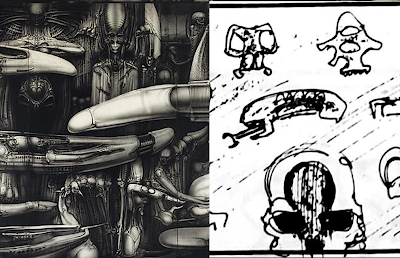 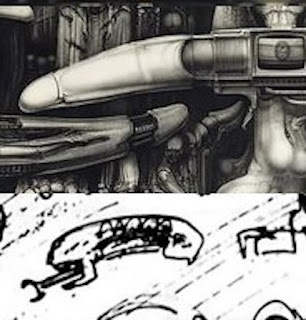 d.iii) In terms of the image fragments here, two human bodies become the sides of the skulls with the lower abdomen becoming the upper jaws, a row of heads becomes the upper part of the skull. The dark area remains the part in shadow.

While this area has already been used for a large skull with the spine, I think that the artist went back to use the details from that area.

Looking for what the artist might have taken ideas for for the upper mid left skull, there's a lower female torso that might almost be an insect-like head peering out of the darkness and there is the female figure's upper body as well to consider that near enough might form a face of sorts 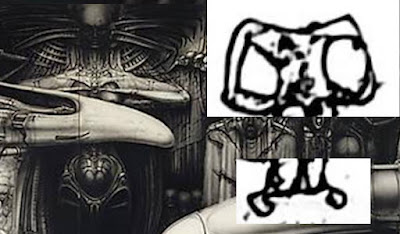 d.v)  Background human with ribbed head dress becomes a skull with one eyes socket abover the other

The small skull to the upper left of the large skull is I think based upon the female with a bulbous ribbed headware seen over the left send of the right horizontal phallic form.

e.i) The right side 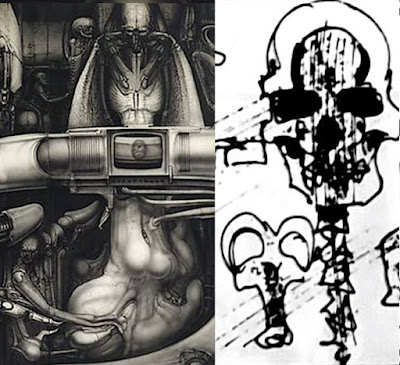 Details in the shadow become the skull shape. In this snippet from Giger's painting, the right side has been reflected to make a full skull face of some sort. 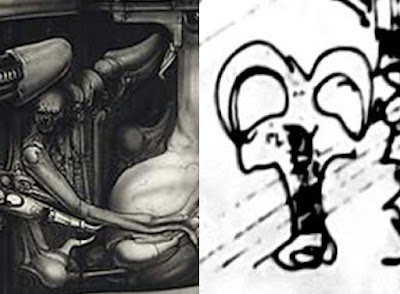 A dimly lit winged humanoid half becomes a simple skull seen from the side with the wings becoming the eye sockets. 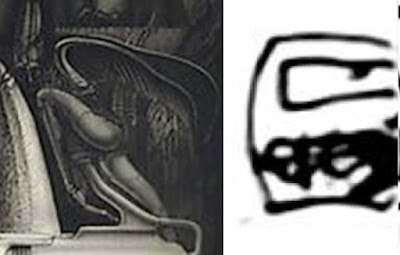 e.iv)  Lower right details become a mask like face seen from the side

Details from the far lower right of the painting become transformed into another simple skull seen from the side. 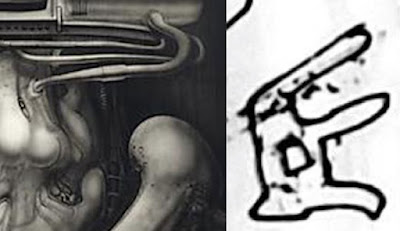