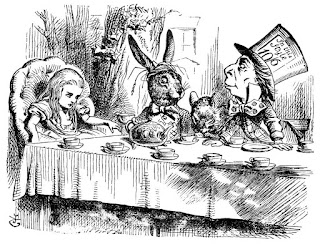 c.i) The hare and the Baphomet

The main connection is the hare and the Baphomet, and one might be hard pressed to see anything else connecting 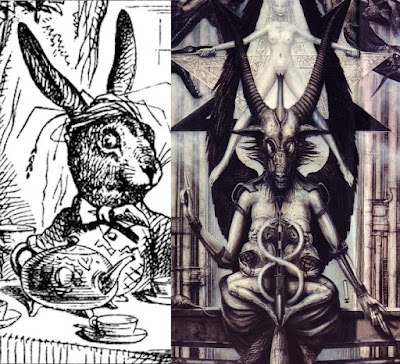 Perhaps I would like to imagine that there is something about the eyes but what .

They're animal heads with eyes staring at the viewer with animal eyes rather than the human eyes of the original Baphomet, but they're different enough still 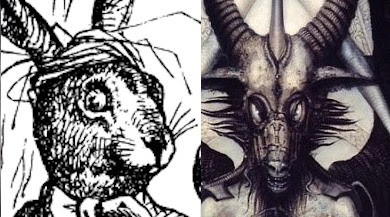 Perhaps the criss-cross lines on the hare's waist coat inspired the idea of hand grenades.

The tea pot becomes the Baphomet's legs on either side as well as the babies holding the hand grenades. .
So my idea is Tenniel's hare illustration referenced the  Baphomet  and Giger integrated some of that.
It's hard to say that Giger's Baphomet was based upon Levi's original Baphomet.

d.ii ) Tea pot spout transforms into the Caduceus
The hare has a teapot with a spout in front of him in Tenniel's drawing.
In terms of Tenniels teapot and Levi's Baphomet, the shield becomes the teapot while the entwined snakes (Caduceus) transform into the teapot spout.
Meanwhile Giger transforms the breasts and stomach into a pair of babies with hand grenades.
Levi's Baphomet was unleashed in 1856 and so this drawing for Alice in Wonderland was published 11 years later, so it might be about that.
Posted by wmmvrrvrrmm