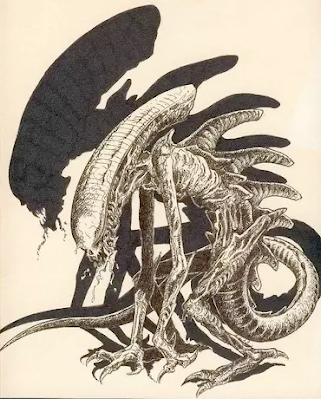 An illustration of the big beast from the movie Alien was being shared around the internet as something drawn by Moebius.

There was no actual evidence that it was by him, I had never seen is before, but everyone else was sure that it was

At that time, I searched on the internet, and found the remains of a blog by an artist named Fraco, the page has been deleted but the text was collected via Google

His text that accompanied it was " Ma version de l'Alien après avoir été traumatisé par le film de Scott...oué, ça date. " which translates as "My version of the Alien after being traumatized by the film Scott ... yeah, that date."

However when the image is called up, there is also the name Mobius mentioned , "Aujourd'hui, quelques vieux dessins maladroits de mes jeunes années (une vingtaine bien fraîche). De la SF tiens. Mon époque space-opera, Moebius, tout ça." which translates as "Today, some old drawings clumsy my younger years (twenty-cold). Like the SF. My time space opera, Moebius, everything." which might have thrown someone else into confusion when they found the image since the original site is now closed,

However his newer blog can be found here. http://fracoland.wordpress.com/ without the illustration