a) Dr Who and the Curse of Peladon
In 1972, shown in the UK from the 29th of January to 19th February, the TV series  Dr Who featured a story The Curse of Peladon which often featured a variety of extra terrestrial creatures of one sort of another, but this one featured a hermaphrodite hexapod extra terrestrial named Alpha Centauri who has a spherical head with a gigantic eye upon a trunk like body wearing a robe and indeed might obviously be compared to a phallus and the robe a foreskin. On the evening of 24th July 2014, I started realising that this may well be the inspiration for Giger's painting Aleph.

b) From Alpha to Aleph
In 1972 Giger painted Aleph which featured an eye in the centre. An obvious connection might well be the eye of the pyramid on the dollar bill, but this entity also features a trunk like body as if perhaps it was a penis with a sharp triangular top. It seems as if Giger has taken different ideas and merged them together in this painting as seems to often do. Lower down this trunk shape body has a collar. If one takes Alpha, the first part of the name of the character Alpha Centauri, and turns it into Arabic, one has the word Aleph.

c) Identifying other biomechanoids in the painting
Once having reasoned with the possibility that Alpha Centauri had been transformed into the central eye of Aleph, I wondered about the other figures. On the right were two prominant figures, one with two faces merged together so that the eyes of the lower face have been replaced with the grinning teeth of the upper face and the top of the head turned into an upside down female lower abdomen and the other with a small face of the skull with a huge cranium and mechanical upper arms.

d) Biomechanisation of Ice Lord Izlyr
I took a look at the various extra terrestrials and saw how Ice Lord Izlyr, a serious looking alien humanoid with a very phallic looking helmet with a line going along the centre and how possibly if biomechanised , Giger might turn it into a cranium that's an inverted human abdomen. The wearer of this biomechanised helmet is instead a woman, one might notice that it's the central pattern on the chestplate has been transformed into breasts in Giger's painting


e) Biomechanisation of Delegate of Arcturus
I took a look at the Delegate of Arcturus, a tentacled head on a mechanical body, with a huge back collar and a dome over his head, I saw how this small head against the huge back collar could be transformed by Giger into a huge bulbous dome like head with a tiny face, and perhaps the idea of the huge bulk of the head was a little inspired by the head of Alpha Centauri in a general way along with a household object with holes such as a tea infuser , a colander, a water sprinkler or maybe a gourde decorated with, instead of using the bizarre pattern on the collar of the The Delegate of Arcturus.

i) If the Aggedor beast from the story with it's single horn on its head is somehow to be seen amongst the amorphous forms to the right of the picture.
ii) It might be difficult for me to point of it remains where other than to note the single horn coming out from a sideview of a head
iii) Perhaps the painting contains vestigial remnants of the creatures tusks in the details.
iv) However no one was telling Giger to make anything definitely recognisable in relation to the Dr Who TV series. 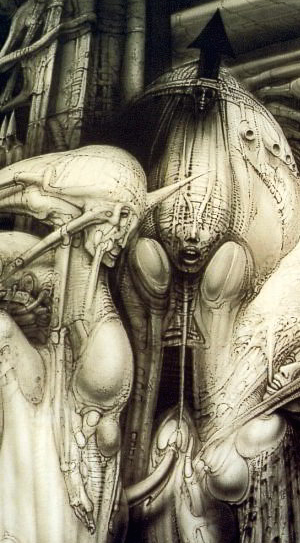 g) Further thoughts on biomechanoids
However looking at the possibility that H R Giger had some form of an interest in what was being shown Doctor Who since he generally liked science fiction and perhaps he might have got to see the programs in Switzerland or at least saw some photographs in magazines, one might start to wonder what he thought about the various other creatures showing up in the series such as the Daleks and Cybermen which also showed up in the series and would be considered biomechanoids and perhaps it influenced his ideas in creating the Necronom series etcetera and the "Swiss Made" alien suit.

h) Aleph references Alan Aldridge's 1967 cover for "The Winds From Nowhere"?
i) 22 November at 13:08: Today I decided to compare Giger's Aleph to Alan Aldridge's 1967 cover for "The Winds From Nowhere". Similarities in the cover suggest that Giger used it because of his enthusiasm for JG Ballard. He used the buildings for the tall forms bending towards the left and the bottom level of the painting references in different ways the shapes of the waves.
ii) The bulging cranium on the right of the cranium is full of holes like a collander and this would be as if Giger replicated the side round windows of the aircrafts along with the multiple rows of windows along the bent sky scrapers.

iii) The biological X form on the left would reference the small Union Jack in the illustration merged with the organic nature of the aircrafts.

iv) Some while ago, I made the comparison between the characters in the painting and a Doctor Who story on TV "Curse of the Peladon"

v) (Added Christmas Day 2016) In the Ballard book illustration, the taller building has a triangular top and the shorter ones have tops that make them look almost phallic. In Giger's painting, the eye is on a triangle upon a rower and beneath it is an erect male member pointing upwards, as if these towers have been straightened and almost reduced to two. 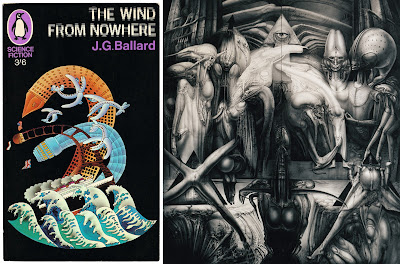 i) See: Giger and the Necronom series