and
HR Giger: Development of Necronom IV via Goya's "Saturn eating his son" via Alice and the flamingo from Lewis Carroll's Alice In Wonderland (Published 1865) by John Tenniel and the cover of Pink Panther #13?

a) It looks to me as if Giger found out about various bits of art being referenced by the comic book illustrator for the Pink Panther comic book series, I think that Chris Foss was using some of them abstractly as reference in his Dune artwork

Giger would have taken note, using #13 in this instance with the understanding that it referenced Francisco's Goya's Saturn Devouring His Son.


I came to realised that a drawing by Moebius of his Arzach character for a science fiction bookshop catalogue cover appeared to reference both the Necronom IV and Goya's Saturn Devouring His Son, and this led me to believing that he was playing around with the idea that Necronom IV also referenced the same Goya painting.

While Saturn devouring his son, the Pink Panther was devouring a hamburger.

b.i) While the Pink Panther already has a partially raised arm bent upwards, here Giger would have extended it making the blue plate the lower part of the beast's upper arm while the glass of red drink on top of the bus becomes the part of the upper arm of the bent arm. 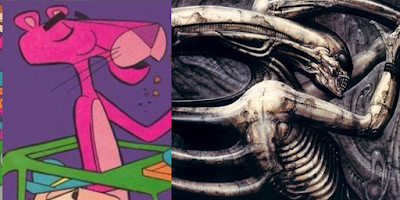 b.iii)  The back of the roof of the van becomes the protrusion with the curved support at the end for the end of the Necronom's head.

The lower part of the van becomes the back pipes. 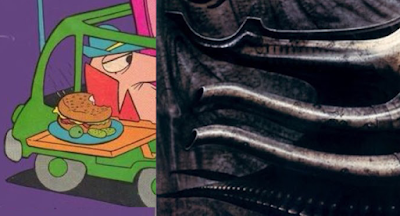