leading from
Alien: Echoes of ideas from the stories of Star Trek The Animated Series
and
Alien : Acid for blood


First Broadcast  13th October 1973
The crew rescue a shapeshifting alien called the Vendorian from a damaged spacecraft who has disguised himself as a missing philanthropist and reveals itself to be an almost octopoidal creature working as a spy for the Romulans, with an ability to re-arrange its molecular structure into something of the same general size, from a planet that has been quarantined. Kirk threatens to pour a bottle of "Orientine"(?) acid onto the creature camouflaged as a medical bed/examination table. He says that it will burn through almost anything but the crystal container that its in.

Perhaps the scene where an incision is made into the Facehugger's finger while Kane is lying on the operating table, and then blood from the facehugger suddenly eats through the floor and then the floor below oddly echoes this scene with the bottle of acid.

One might also make the association with O'Bannon's earlier script "They Bite" featuring insect like creatures that would transform into whatever they ate, that could be even objects such as rubber tires 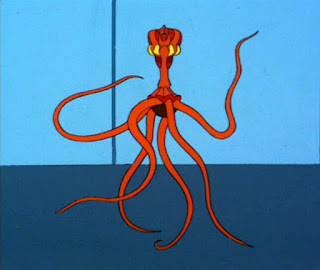