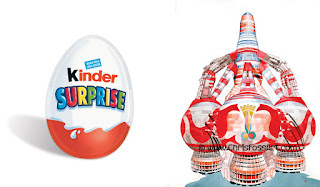 a) A Kinder Surprise!
1st October, 2016, I posted an image of Chris Foss' design for a Harkonnen Flagship for the unmade Jodorowsky movie "Dune" . David Spada (who runs Monsterlegacy ) suddenly presented to me the image of the Kinder egg making an association between the two, perhaps even half jokingly. Curiously they generally share the same colour scheme and the bauble shaped pods on the side of Foss' rockets have wavy near enough similar red forms.


b) Looking further
Taking this more seriously than expected, I looked further at the history of the Kinder egg and found out that the Kinder Surprise as it officially called, first came out the previous year in 1974. So I might ask if Chris Foss found out about the product as someone fairly new and so felt inspired enough by the wrapper when painting his rocket ship.