Fisher Price Teacher Clock merges with the Enigma of William Tell.  Lead singer of Jethro Tull as a spectral moon playing an aqualung that's neither a Manitou, a Manatee or Manta Ray but a sea lion with sting ray gills and mouth! Frank Frazettas Man Ape appears to have been absorbed into the painting as well.

a) Oddities of Mordor IV
a. i) Mordor IV shows itself to contain various floating creatures looking as if they're playing various wind instruments that generally conform to croissant shapes with valves.

a. ii) However I decided on the 3rd April 2015, the valves become the gills of a sting ray and the mouth piece becomes the mouth of a sting ray, the shape roughly becomes like a sea lion, in place of a manatee and a manta-ray being played away by a manitou.

a. iii) A shorter entity with an animal leg looks as if a tentacle like flute is growing around of the side of its head, a tentacle with holes, and as a phallus sliding up between the hips of a phantom image of a woman.

a. iv) By 12th August 2016 I had decided that the Fisher Price Teaching Clock was also being referenced (See: Aquatic Park imagery from 3rd April 2015) and by 4th December 2016, I came to realise that Frank Frazetta's Man Ape was perhaps used as a foundation for the painting..


b) Musical associations
I might have assumed that Giger was listening to some jazz music, but I suddenly on the 15th January 2016 thought about the flute player further down, and the boggle eyes of the croissant player, along with how the croissant linked with the animal leg at the end seemed to remind me of the raised bent leg of the pose of the lead of the band Jethro Tull well known back in the 1970s,

It seemed as if this painting had been set off by ideas about a Jethro Tull album called Aqualung and all the associations that Giger could have about such a word with a biomechanised point of view.  (See: Inspired by Jethro Tull and their album Aqualung?  from 15th January 2016)

c) The enigma of William Tell and Jethro Tull fused into one
Meanwhile on the 18th January 2016, I realised that a thought or two was being given to the idea of Dali's "Enigma of William Tell" that had a similar surname to Jethro Tull, the piano, turning into a biomechanised electronic keyboard that would be played by musician John Spencer who is nothing more than a phantom impression integrated into his keyboard.

There is a general crescent shape broken up into parts dominating the whole picture which is would represent the general circular form of the clock shape.

f. i) 8th May 2017, I have thought about this for a while but this day I suddenly realise that the Mordor IV references the Excessive Machine from Barbarella (1968) directed by Roger Vadim.

Some time ago I realised that the Space Jockey's seat referenced the Excessive Machine and it remained on my mind.


f. ii) Consider for instance the large head with two pimple like eyes at the top blowing the saxophone being similar to the head rest of the machine and Stingray mouth in front of it being the place where Barbarella's head is.

f. iii) The humanoid at the bottom of the croissant with one large leg would become Durand Durand who plays the machine like an organ. 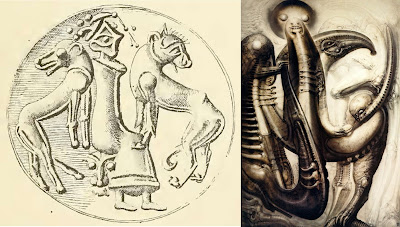 h) See: References the cover of The Pink Panther and The Inspector #26 (Published May 1975 by Gold Key)? 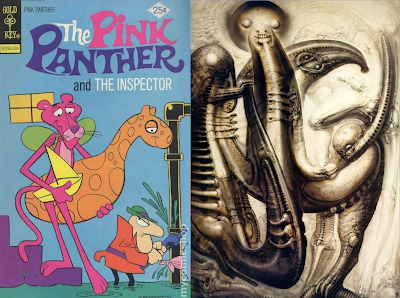 i) See: References illustration from Linda C. Cain and Susan Rosenbaum's Blast Off (1973) by Leo and Diane Dillon? 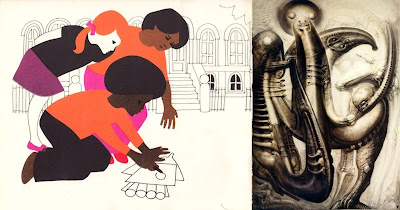 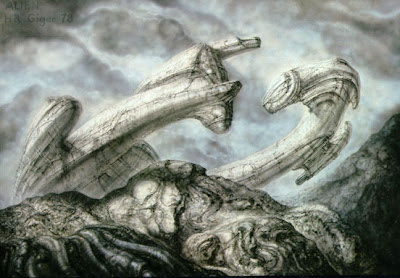