HR GIger's Necronom VII :
based on ancient helmet, Doctor Who monster or both?

leading from
Doctor Who.


a) Looking at Necronom VII
Necronom VII, a tall humanoid head with large goggles connected by a pipe roughly resembling a rams horn trailing around the back of the head and spines running down along the centre of the front of the skull, and it's nose almost flat ends with a sharp ridge. It is painted by Giger as one of his biomechanoids  Also this entity has peculiar high shoulders which I started to wonder if it was a sort of a high collar.

b) Obvious comparison to viking helmets
One thing of some obvious note is that it might be an interpretation of an ancient helmet such as an anglo saxon one or some sort of viking helmet. Below is the Vendel Helmet from Sweden with a noticeable raised central ridge, eye goggles and a flat noseguard like nose ending with a sharp tip perhaps similar to what Giger has painted


b) Loose Comparison to the mask of the Ice Warrior
When Giger painted Aleph which I believe incorporated characters from the doctor who series "Curse of Peladon", there seem to be all the aliens and monsters from those episodes apart from the character known as the Ice Warrior. So if looking the general shape of the head, the eye goggles, the nose and  the odd raised collar, I saw something enough of the form of the head of an Ice Warrior from that story which indeed loosely resembles a viking or anglo saxon helmet. (I made a connection on 15th September 2014 between the Ice Warrior and Necronom VII)  This character makes it's first appearance in the Doctor Who story The Ice Warriors which appeared first on British TV in 1967 and then appeared in the Doctor Who stories The Seeds of Death (1969), The Curse of Peladon (1972) and The Monster of Peladon (1974). The head is loosely supposed to resemble an anglo saxon helmet.


c) Ice Warrior concept, a biomechanoid
The Ice Warriors story includes the discovery of a strange huge monstrous humanoid body stuck frozen in a glacier, and when it is taken in doors and thawed out it suddenly comes to life once again. (See Wikipedia page for more information).  The writer who invented them Brian Hales envisioned them as cyborgs which perhaps went too far in the direction of cybermen, and so the production department went a different direction with the design and made them into huge armoured reptiles, traces of their cyborg origins remained in the script and their suit that contained electronic items such as weaponry and helmet is discovered to have electronic connections and it's decided that it must be a sophisticated space helmet. Their armour appears to be an organic shell, the design appears to a good example of the question "where does biology stop and technology begin?" This character so loosely resembling Giger's painting just so happens to generally  fit into Giger's concept of the Necronom concept. If Giger wanted to mix this character with ideas about viking helmets, that's another possibility.
( See The Development of Necronom IV
and also Ice Warriors - An Accidental Creation at Mindrobbers.co.uk) 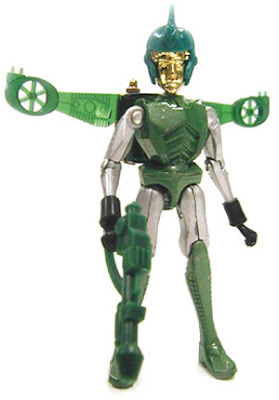 The right man's parted hair become the ribbed horns of the creature.
Perhaps the empty nasal cavity contributes to the idea of the visor. 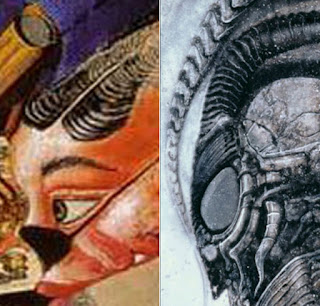 His back support becomes a limb connecting with the ear. 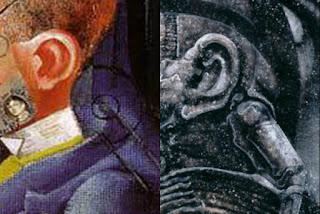