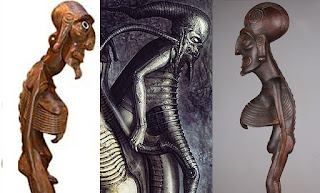 Leading from
The origins of Necronom V


a) Curious papyrus illustration
On November 27th 2015, Kyle Krane posted an image of a papyrus drawing of a Kavakava figure from Easter Island at the Weyland-Yutani Bulletin thinking that it resembled an engineer from Prometheus and perhaps it a connection with the deity Makemake which could be said was valid assumption since there was an image of the deity on the character's head. I suddenly thought that it looked like a character out of Giger's Necronom V who has a limb protruding from his the bottom of the ribcage. Had this drawing been inspired by Giger, I wondered, or had Giger been inspired by whatever this drawing was on, or had there been a bit of blending between the two by the artist of this strange image. And so it was then. Then I noticed the words Kava-Kava at the bottom of the illustration, looked up the meaning and found out about the Moai Kava-Kava carvings

b) Moai Kava-Kava
The ancestral Moai Kava-Kava is often a small stylised wooden figure of a standing, slightly stooped male with an emaciated body. It features an elongated head with large eyes, a protruding beard, elongated ears and a ribcage ending in a strange protrusion that would be an exaggerated xiphoid process. Sometimes the ribcage would be horizontally elongated to the extreme. Little is known about their cultural context but perhaps they represent spirits or ghosts (Aku Aku) as well as deceased ancestors. German Expressionist Max Ernst, was inspired by these figures and their rituals and they can also be found in the collections of the French surrealist André Breton.