23rd August 2016
Of course after working out that Spacetrip 1 was a reinterpretation of a Star Wars poster, I might wonder if Spacetrip 2 was also.

However the basic impression that I'm starting of with is a snail shell like stomach bag at the top that might be a large abstract modern building and on the left of the middle a pipe divides into three pipes that feeds a row of three a row of three humanoids with with large white heads, and beneath the three pipes connecting to them is a railway with train.

The snail shell stomach bag building like structure also makes me think of the whirl of the Tasmanian devil from numerous Warner Brothers cartoons that featured characters like Bugs Bunny and Daffy Duck. The teeth would be the small eye shaped row of bristles at the top. To the top right of the picture would be an arm with a fist curling upwards and the fingers appear as a vertical row of four horizontal fish or eye shapes.  At the moment I can not finding an image of the cartoon character that really fit the painting enough, but there's no certainty that Giger would have referenced a particular image. Meanwhile its horns that didn't fit at the top have been moved to the left side sticking out from the side horizontally 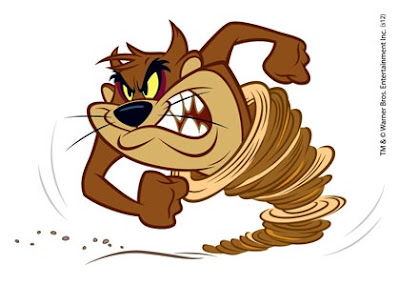 24th August 2016
The other side to this painting is the identity of the three seated figures , Are they disney characters such as Donald Duck's nephews Huey, Duey and Louis or perhaps the three little pigs from another Disney cartoon The Three Little Pigs from 1933 and if it's the latter, does this also make the Tasmanian Devil character also the big bag wolf expanding his chest as he's about to try to blow one of the three little pigs houses down.