still collating, yes I'm looking at what I'm writing and rewriting
and I'm hoping to make sense out of some of this at some point


a) Initial description
The composition of Vlad Tepes shows an environment worked out in a way to give the impression of three dimensions.

What exactly in it shows a connection with Vlad the Impaler other than stakes to be rammed through the heart of vampires?

Something that looks like a vast walnut is being broken open at the base of the picture.

There are tall shadowy figures with ribbed serpentine bodies, one on the left is armed with a cross shaped spike but the spike might also be one shadowy tentacle.

b) See  The Banana Splits Adventure Hour
Perhaps Giger's painting started off as some vague doodles suggestive of characters from The Banana Splits adventure hour that first came onto television in the late 1960s and would show up repeated on various television stations in the following decades, and the autosodomising maiden in his painting was enjoying the later years of her childhood as a "Sour Grapes" bunch dancer

In the upper right,  the eye parts of a female face with peculiar head gear, both coiling like a snail shell and with feathered wings, and she has two eyes that appear to be turned around as if they were vertical.

When compared to the shapes from Wifredo Lam's "Femme" (1957) the face with a pipe sticking out of its nose echoes the rhombus shape attached to a ribbons and one ribbon enters the centre of the shape,

As Giger adds the biomechanised Cruella de Vil, the face becomes part of the curtans from that image

f) See: Cookaburra Headdress on the verge of transforming into a Nautilus cephalopod

Are they the sleeping heads of strangely beaked Mugwumps from William Burroughs Naked Lunch?

Was Giger another artist who tried to imagine what these creatures looked like.

Does that mean the lower body of the Cruella de Vil biomechanoid is a giant aquatic Brazilian centipede whose black meat was so prized in the Burroughs novel. At the far left a tale curls and at its end there is a spike.

Also another point of note is that if one takes one of these strange elongated sleeping heads  in conjunction with this the round cabbage like form with a vaginal opening at the centre, it starts to echo the form of the baby from Eraserhead that Giger was very fond of at the time after a trip to New York.

h) mysterious central form with phallic head
In Giger's world, above the uterine walnut like form and between the two shadowy figures is a lower torso of a humanoid being and above.

Cruella's bag turns into a mysterious floating phallic head with strange legs, its cheeks are swollen, one of its eyes looks as if it is being poked by the left tall dark figure.

One can see two long fangs sticking out of its mouth.

i) Traces of heads
To the far right is the remains of a human head having its eye poked by a pointed nipple from a breast perhaps connected to the body of the female with the winged and the coil shelled headgear.

Further down the body, a small face of an animal at the bottom of a line of bulbous forms and below it is a face with the U-shaped configuration as mandibles and the spike sticking out of the centre of the face.

j) See: Change from Micky Mouse to Vlad The Impaler

k) See: Foundations in a Hugo Steiner-Prag illustration from The Golem
The architecture of Vlad Tepes goes back to reveries of Prag as inhabited by the Golem as featured in Gustave Meyrink's novel

l) See: Vlad Tepes references Wifredo Lam's Femme 1957
Wifredo Lam's painting Femme begins to contribute to the mysteries of the painting's structure as well for Giger to overlay with ideas 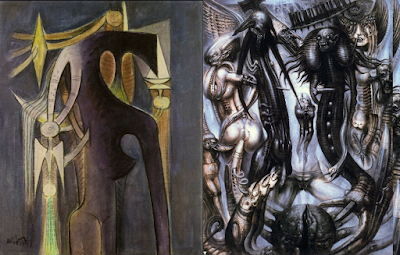 m) See: Images of the painting in progress