leading from
HR Giger: Alien Monster IV
and
"The Treasures of Satan" trail through the 1970s 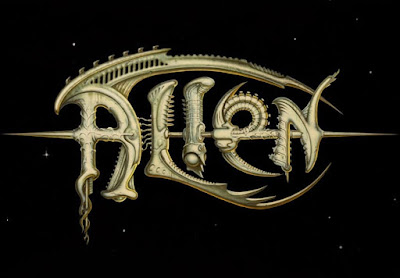 a.i) 20th October 2016, I started to wonder  if this unused Alien logo done around the early stages of the Alien production was a starting point for Alien monster IV, inspired by production artwork.
Michael Doret designed and drew the forms based on the bio-mechanical forms that he saw in some publicity stills from the production.
It's as if elements of Delville's Treasures of Satan had somehow become absorbed in to the logo.

a.ii) The tendrils coming from the top of the devils wings have perhaps transformed into the row of tab like blades running along the top of the wing features on the top left that perhaps might actually be the octopus suckers at the end of the tentacle like wings moved to the front. 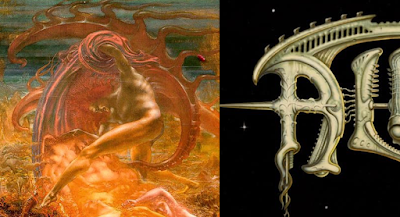 a.iii) The devil's zigzagging tail has transformed into the caduceus below the A in Alien. 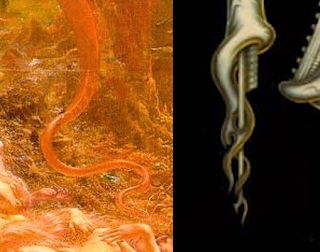 a.iv) Since Michael Doret claims that he had never seen Treasures of Satan until I showed it to him, he obviously must be a talented man who just managed to conjure the right shapes to fit the general pattern, and well that's perhaps okay.
He didn't think that it was likely that Giger had seen his work, and then we don't know that should be so either way.

b) One might assume that Giger appears to have been inspired by the wings above the letter A , and transformed them into the complicated wings of his creature.
The logo's wing where the end becomes reduced to a jagged thorn becomes transformed into insect like parts with mandibles, the curve of this letter becomes the curve of the Alien monster's body. 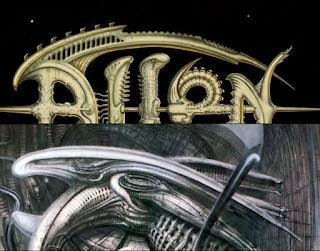 c) The bottom of the L of Alien has transformed into a stag beetle like mandible, and perhaps has been transformed into the L shaped limb coming from the left of Giger's painting ending in a blade tip staff like form from which a glow worm appears 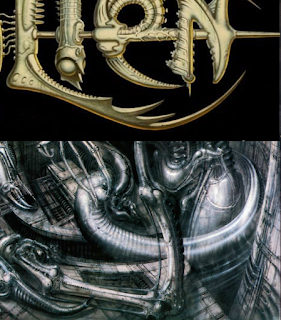