Alien: Changes to the derelict

a) Ridley sees something he likes

When Giger handed in his painting of the derelict, Ridley saw it and realised that what they were looking at was a totally alien looking spacecraft.

He didn't think it should look like something with lots of lights on it or something like that.

He had the idea that it should look like nothing imaginable or extraordinarily familiar and slightly archaic looking.

So Giger's completed work was a knockout and Ridley took one look at it and said "That's it", but there were other people whose decision was important in this matter and they didn't see it his way.

But Ridley had to keep digging his heels, and tell them "you wont get a better derelict, don't screw around with it."

On either the 14th or 19th of July, Giger is asked to the office where Ridley, Mike Seymour and Gordon Carroll are all waiting for him.

Gordon says that Giger will design another derelict.

The entrance passage and the landscape could stay the same as what they had been building in Sound Stage H, but the rest will have to be changed.

The concern is that at the moment the derelict is too reminiscent of a bone and people might think it's part of the landscape.

And with that there would also be technical difficulties in building it.

Giger was astounded to hear this from Gordon who had been enthusiastic about his derelict design when he first saw it and so he suspected that Ron Shusett and Dan O'Bannon were behind this and that Gordon was acting as their mouthpiece.

As it happened, from the time that Dan came over from the USA in March, he didn't think that Giger's design of the derelict was technical enough.

As good as friends they might be, they could still be people to infuriate Giger

Giger tried to convince Gordon that the dimensions and the aerodynamic shape were good enough in themselves to distinguish the derelict from the landscape and moreover the technical details ought to not be too obvious in case they spoil the biomechanical character of a space ship built by non-humans.

Giger didn't see how he could improve on it, and indeed he regarded it as one of his best pictures. But Carroll in this discussion proves unyielding and finally practically orders Giger to conjure up something else out of the ground as if this man was supposed to shake good ideas out of his sleeve.

For some reason Ridley kept quiet during the discussion and in silent opposition demonstrated a quite ordinary, banal crashed aircraft with its tail fins pointing upwards.

However Giger understood the situation and promised to try something different as he went back to his work. Time would work for him

There was talk about changes that needed to be made to the derelict's design, the information about this is not exactly clear in the quotes below.

We find Giger's explanation revealed that there was some confusion about whether the ship could be told apart from the landscape and then we also discover another side to it, that his derelict space ship design didn't make sense in three dimensional terms for the modellers so Giger had to do some pictures to explain the structure even further.

Giger mentioned that there were several reasons given for the need to change it, but nothing about the problem regarding how to interpret it's dimensions.

Were these two events or one event seen from two extremely different points of view about the need to change the design?

We might wonder perhaps if the earlier concern about whether they could be interpreted took place at an earlier time as described in the first Giger quote in "Initial Work".

It was Brian Johnson who compared Giger's painting to an Escher optical illusion but going by the content of his interviews Escher's work was something he liked to think about.

The model department went to work on creating the thing, they took a nine inch piece of polystyrene and then carve it up with a little device that resembled a tuning fork with a wire stretched between.

When it was heated up, the hot wire just melts its way through the polystyrene and the user can carve the right sort of shapes very quickly with detail that could not be got with clay, but somehow what they worked out from the image of the derelict form didn't work

To remedy this Brian got together with Giger to discuss possible solutions.

Giger went off to do the drawing work. He produced two other paintings to explain the shape of the derelict as seen from the side, works 396 and 397, and perhaps 382.

From that they were able to produce another polystyrene shape which Giger approved of.

They then showed the rough sculpted form to Ridley who said that it was somewhere near what he would like. 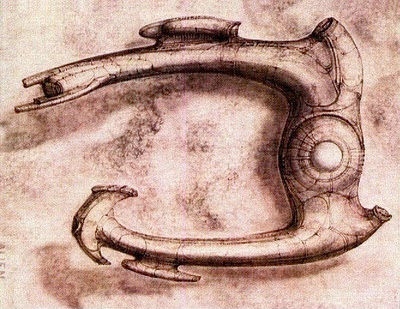