Information from interview used in

Dune and the Gathering,
A Sofa in LA 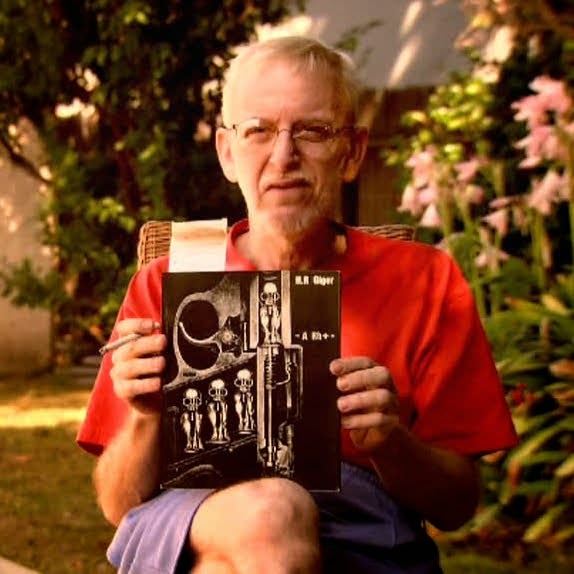 Dan O'Bannon: Well, this is it, this is the book I borrowed from Giger in 1975. When Dune fell through, I came back to LA, I brought this book with me, not much else. I didn't know the picture was going to be cancelled, I came back here for Christmas, to see my friends, and I had a phone call, Dune was cancelled, so I lost all my clothes and my luggage and everything but I did have this, and erm, I had to do something with myself so I did Alien, and the idea for Alien, a lot of it came from inspirations I had when I was working on, on Dune with Jodorowsky and er, with Rudi. In particular, I had the idea for Alien as a movie for a long time, but I knew that I needed... the monster had to be something completely original that no one had ever seen before, and erm, when i saw this book I suddenly realised that this was the artist that I needed. Very simply, I looked at this and I said "If I could get this guy to design the monster in a monster movie, it would be something that no one had seen on a movie screen before, and at that point, I was in no position to hire Hans or do anything accept write the script, and I did write the script, and er, when we did eventually make a deal with Fox , arm, I just kept pushing Giger at them, I kept saying "Giger... Giger". They put me in charge of doing preliminary design before Ridley was hired on the picture, and I got them to erm, to hire Ron Cobb who's a local artist, and to fly in Chris Foss from England who I had just met on Dune, and erm, I used the same technique that Alejandro did, I set them up in the same room together and I sat with them. The idea being again that they would stimulate each other creatively by being together, and they did, they turned out wonderful designs, wonderful artists doing wonderful work, but Fox would still not hire Giger, because Giger wasn't a movie artist, he was some crazy fine artist from Europe or something. They wanted an art director, they wanted a production designer, this was in 1975. Star Wars had not come out yet, they wanted a movie designer. When er, when Ridley was finally hired, ah, to direct it. The first time I met him, I brought, I don't know if it was this book, but I brought a book of Giger and handed it to Ridley, and erm, Ridley immediately fell in love with the work, and so Giger was hired on by Twentieth to do it. (Moebius Redux documentary interviews on Disc 2 of DVD set)
Posted by wmmvrrvrrmm