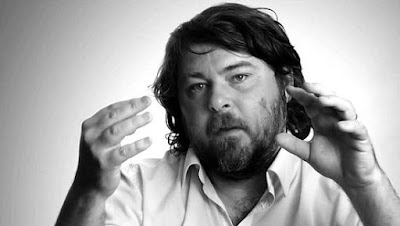 a) Seeing the poster
Ben first saw the poster of Alien when he was a child, and he thought that he could feel the poster and if it were in the ether, and the tagline "In space, no one can hear you scream" blew his mind. He didn't know what it was all about.

b) Seeing part of a video recording
Eventually he managed to get to tape it off the television, but he didn't quite get the recording right and got perhaps two and a half hours of gold and half an hour of Alien, but what he saw got to the point where the chestburster erupted from Kane, although Ben perceived it as his stomach, and then the tape rewound. He thought near enough the worlds "Ah, it's the most depressing short film you've ever seen."

c) Thoughts about the film
However over time he would come to know the film better having watched it and he would think about it in terms of Kubrick., and how it felt like a documentary made in space. What he did notice was that Scott designed impeccable beautiful environments, with the nuts and bolts of the ship and the planet, the looking at the monitors and the noise the computer makes when it turns on with the noise "dukadukadukaduka "