Leading from
HR Giger: Alien Monster IV
and
Salvador Dali's "Daddy Longlegs of The Evening - Hope!"
and
James Gleeson
and
"The Treasures of Satan" trail through the 1940s 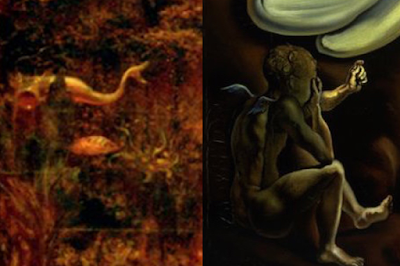 The bird like creature in the distance that's actually a fish tale, from Treasures of Satan becomes
the held out arm of the cherub, and the toadstool beneath becomes a leg.


Perhaps the two gaps in the cloud showing the emerald background become holes in the skin in the Dali painting and perhaps also the inkpots lying on top of the body. The orange column of cloud next to the tentacle becomes an arm.


Dali created a wall around a tree and it's roughly inspired by a diagonal edge of the left of the pile of bodies and horizontally across the bodies going upwards to the righ, Perhaps one might want to attempt to match the lines up more accurately on the Delville painting and expect something like 57 degree angle with a 33 degree angle between the top and Satan's leg as some sort of Masonic reference and expect all kinds of fun and exciting geometrical statements to pop up since Delville was a member of the Rosicrucians, but it's not up to me to say that it would work.

a) Reflections in Gleeson
A day came, 22nd June 2016, when I looked at James Gleeson's painting Galaxy from 1943 and noticed that Giger perhaps referenced this for Alien Monster IV and that it referenced Dali's Daddy Longlegs of the Evening- Hope together with Delville's Treasures of Satan and the realisation came that he the Dali painting referenced Delville's painting and that's why Gleeson was referencing the two together.

b) Did Gleeson know about the connection with "Treasures of Satan"?
While it shows that Gleeson referenced "Daddy Longlegs of the evening - Hope!", there appears to be a glimmer of an idea that he shows off ideas inspired by Treasure's of Satan, that are perhaps not instantly comparable. In fact, looking at Gleeson's painting and seeing some similarities of Treasures of Satan made me realise that Dali's painting referenced Delville's painting.

The bent tips of the wing like tentacles on Satan become horn like forms projecting from the apple like structure and he shows off wings in the upper parts of his painting suggests wings.

The apple meanwhile has a bite in it and the remaining skin shown forms a crescent perhaps reminiscent of the sheet flowing down the front of the satanic being. Where his head would have been is now the bit in the apple.  However we might be able to compare the tentacles ends and the curling tendril of the vegetation of Gleeson's painting or might we assume that Gleeson extracted this from the F-holes in the violin