a) On the 7th of July, 2015 after seeing the curving forms of Giger's painting and O'Bannon's sketch on taken from the Rocket Blast Comicolletor magazine, on the same page in an article on David Spada's Monsterlegacy blog, it dawned on me on the same evening that I suddenly decided that it was likely that Dan O'Bannon had taken Giger's Necronom IX and transformed it into an insect like monster as an early sketch for a monster for Alien, that Giger must have seen O'Bannon's drawing of the alien and impressed enough with that transformed it back into a Giger merging it with the form of Delville's paintings. It seems as if certain points on the O'Bannon drawing have manifested similarities with forms in Jean Delville's Treasures of Satan for the purpose of tempting Giger to fuse them together, and the bend in the wrist of O'Bannon's creature's pincer is incorporated into the bend of the wrist of Giger's creature. (See: Necronom IX (1976) and also The Biomechanoid that O'Bannon Wanted


c) The curve flowing between the ribbed neck and the collar of O'Bannon's creature would become the curve that would stretch along the elongated Alien Monster IV's neck marking the base of the familiar dome along the top of the head in the manner of the design of the monster of Alien. The pincer forelimb from O'Bannon's creature becomes the beak of Giger's creature.

d) The long tusks at the front of O'Bannon's creature merge in with the position of the sheet of material curving down to the front of Satan character on the left of the image, and together become the pathway for where Giger stretches the head downwards in a curve. Where there is an impression on O'Bannon's creature's cranium where Necronom IX's ear would have been, it transforms into the shoulder of the arm of Alien Monster IV.


e) Perhaps a few more things ought to be pointed out about the relationships between the shapes in the images but Giger really only used it as an agreeable place to start off without having to reference its origins without any definition. 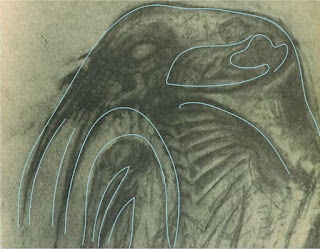 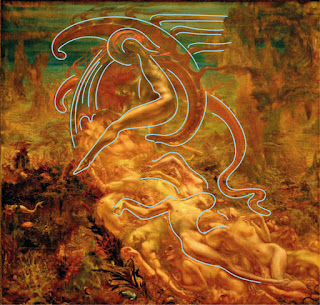 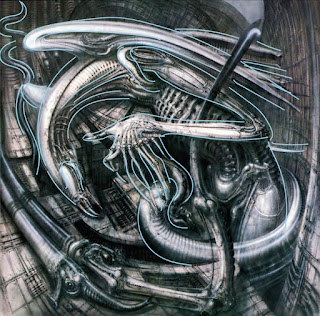