leading from
Alien: Creating The Nostromo
and
Alien: Building the Refinery 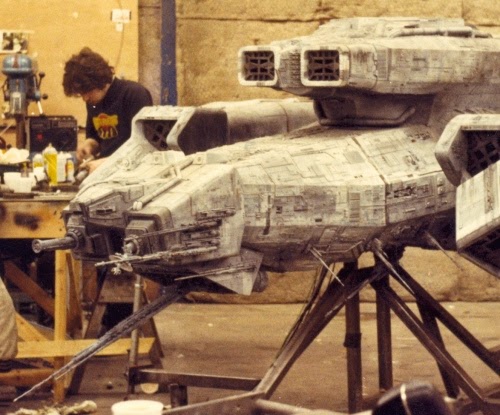 a) Transplanting brass probes
Martin Bower turned up with lots of pieces of brass to represent probes on the refinery.

The first day Ridley came to look at the Nostromo, he saw the big refinery model, spotted all the spires on the towers, decided against the look and asked if the modelling team could pull a few of them off, which Bill Pearson did, and then Ridley wanted them stuck on the underside of the Nostromo, so they'd point down towards the surface of the planet.

b) Last minute additions
It got to the point where Ridley was asking Bill to stick bits on the model even when it was in front of the camera.

Ridley had an image in mind and discussed it with the modelling team on the stage, but also it was a case of him seeing a bit that he thought should be busier and so the modellers would stick more wiggets onto it.

Most of the antennae were epoxied in after the model had been drilled, though some were taped on with gaffer tape.

Two probes were on two small rams, as there was a piece in the dialogue about retracting umbilicals.

The probes , which were in a down position, would them come up flush, but they wouldn't make it into the final cut. Ridley liked the antennae very much because he could bring his camera right up to them, giving the model a rigged look like an old sailing ship