leading from
Alien : The Derelict
and
Alien: Making the Movie


a) A mysterious film of blue light
In the silo, below the jockey's chamber, there are thousands of spores that must surely be as old as the Jockey's remains.

They are covered over by a film of blue light that is a laserbeam spread like a thin sheet which represented the placenta of the eggs, and there is a sound as the astronaut penetrates the laser beam's field as if a seal was being broken 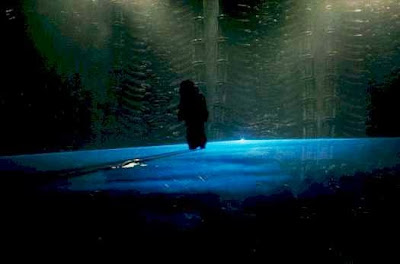 Ridley storyboard's had Kane going down a long tube and then emerging into this massive chamber through a hole in the ceiling, as if it were a vagina.

Before he does this, at the bottom of this tube he finds a very thin membrane which he cuts through, as if the egg silo were a virgin and a feint breeze drifts upwards as he spookily descends through the slit into the blackness.

Kane can't see anything, so he says "I'm going to light myself up, can you boost me?"

Ridley wanted around ten thousand tiny pea lights stitched into Kane's suit so they could light him up like a Christmas tree and have him hanging there from the roof of this cavern, like a beautiful chandelier.

He thought it would be a marvelous image, but the sequence was cut for budget reasons.

By now, the egg silo and derelict had been merged into one, so Kane was being arguably lowered into the hold of the ship.

Ridley wanted something to replace the membrane, which he saw as a kind of a biological alarm which triggered a response in the eggs.
Basically, they would all come awake and sit waiting to be touched so that they knew that they could open and someone was there to attach to so perhaps they could go off to another planet or spread by whatever means
No one knew how to do it.
They even thought that perhaps they could animate it afterwards,


d)  The scanning laser
d.i)  When Roger first saw holograms
Previously, Roger had visited Anton in his workshop to see some holograms he was working on using laser technology. Anton wanted to show them to him with an idea of using them in films.
That was the first time Roger had ever seen a hologram live, and it was fascinating because right in front of me was a three-dimensional image.
Anton had developed and designed "The Light Fantastic," a holography show that became the touring light show for the The Who.
d.ii) Roger is asked by Anton over to see the show lasers
As it happens, The Who permanently rented a stage in Shepperton for rehearsing and they were rehearsing there at the time.
One short way to describe what started the trip to see the lasers was that Anton called Roger and said  "We've got these lasers. Do you want to see it?"
But the story would also open up that Roger had seen Anton driving in at the car park and it was one of those innocent conversations where Anton said to Roger "Hi!"
Roger would have have replied "Hi how are you doing?"
Anton would have replied "Oh, I'm on the stage with The Who, we're doing lasers and stuff. Come and have a look "

At that time Roger much like most people else from that time hadn't seen lasers and so this was new.

d.iii) Roger Christian  and Les Dilley see the lasers
Roger went across with Les Dilley the art director  to the The Who's stage.
Anton showed us the various laser beams and effects they were pioneering, and being new to Roger and Les, they looked spectacular.
Anton showed them how they fired like bullets into the air in different patterns, or shot out like veined light beams
d.iv) Roger has an idea about using them for the egg chamber membrane
There was a fairly strong scanning laser being
Anton then showed when they fanned it out with smoke that it looked amazing.
Roger said "These are amazing can they form a membrane like that when they go around these?"
Anton replied "Yeah"
He showed them how they could spread like a membrane across the stage.
Then they knew we had found an answer to another problem,
Roger and Les like the green and the blue laser beams used i this way
d.v) Getting Ridley to see this
Roger's next thought was that he had to get Ridley around to see this.
He asked Anton "Anton , do you mind, can you ask The Who if they mind if I bring Ridley here?"
Roger approached Ridley and said "You'd better come and look at this"
Then he and Les Dilley took Ridley over there to see the laser membrane as a solution for the egg scene
Ridley took one look at them and approved
d.vii) Testing the laser for Alien
The laser was mounted so it would scan just above the eggs and give them this sheet of blue light.

The question being asked is "Will it go on film?"
Ridley never thought it would photograph, because the light level is very low, though, so everything in there had to be shot absolutely wide open
Somehow, with the wizardry of Derek Vanlint's cinematography, it worked.
d.viii) Getting the camera to work with the lasers
It operated with a mirror inside oscillating about three thousand cycles per second with a sweeping arc of about fifty or sixty degrees.

If you could stop the mirror you'd get a single point of light, but when it's moving it's not dangerous because you're subjected to the power of the laser for shorts bits of time.

Since the laser's scanning so fast and the camera's only running at twenty four frames per second, there are only a number of scans on one image.

d.ix) Interesting shapes in the lasers
They had to use a lot of smoke and dry ice fog; otherwise it wouldn't show up at all because the beam's only bright when it's actually touching something.
So when people dropped through it, all of these amazing shapes would form in the membrane like reverse shadow.
The tests looked great.

d.x) Only a short amount of time to use it

They could have done a lot more with it, but they didn't have the time.

As it was, they only had about half a day to test it, then another day and a half to shoot the whole sequence.

But Brian Johnson remembered that they shot several different sequences using the laserbeams but only the laser placenta scene was finally used in the film.


e) A protective ray or whatever
Despite the fact that the placenta had now become noticeably like a sheet of laser light which brought people to ask other questions about what it might in terms of something more technological, it remained like a protective skin or a placenta wall in Ridley's mind.

Meanwhile Brian Johnson and Roger Christian could agree that it worked as a weird protective ray but there were limitations to how one could explain what it was, and so Brian wasn't sure what it was supposed to be.
Then if it was a laser, how was this thing being powered by the alien spaceship that's been derelict for perhaps aeons, but then it was an alien space ship after all so those questions couldn't necessarily be answered.