Leading from
Prometheus: The "Space Jockey as a suit" question


Paul Schrader made Cat Pople (released April 1982) with an interest in avoiding any comparison to Alien, trying to keep it in a crisp visual world.  His cat transformation though too another direction showing in the autopsy scene of the dead black panther cutting it open, a green gas escapes and he discovers a human body within the cat. Before he can document the finding, the animal has melted into the same flesh and viscera pool as before. 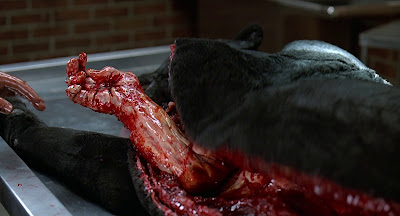