Aliens: The Judgment of Paris vii and the Alien queen's elbow


a) 6th April 2015: Continuing on from the Gleeson's The Sower being posted, an article about how James Gleeson's borrowed from various artists including Giger was written by a Demetrios Vakras is posted (http://www.vakras.com/contra-gleeson.html ) in the same thread by Christian De Boeck, and the article makes a claim that Gleeson copied Giger's derelict ship entrances for his picture The judgement of Paris viii shown in black and white in low resolution on the site so you can't actually look at the details being discussed in relation to Giger's work


b) Finding "The Judgement of Paris vi"
Today I've found a much more detailed colour pastal version of the composition, and the oval ends appear to be openings at the end of organic tubes. I wanted to find a better picture of the Gleeson image, but although there wasn't a bigger one, there was another version of the same composition by Gleeson done in colour pastel and the composition turned out to be called "The Judgement of Paris vi".  However the limb in question shows some similarities to Giger's style of art, perhaps in a way that is purely of Gleeson's own invention.


c) From the Alien's elbow to a foreshadowing the Alien Queen's elbow?
I step on another mind bomb by taking notice of the fact that the knee or elbow of the limb in question although it seems loosely inspired by the arm of Giger's Alien with a pile running around the elbow joint in the painting on the front of Giger's Alien, which probably wouldn't be produced very well in the actual suit. It looks suspiciously like the elbows of Jim Cameron's Alien Queen from later in the 1980s which has an interesting inner curve around the elbow joint with the two ribbed pipes running around either side of the joint which didn't exist in Giger's designs. There are the short row of squarish holes along the joint as well. Of course, while Giger's Alien has spikes coming out of its elbows, the hand in Gleeson's art appearing from behind the tip of the elbow has been transformed into a much more squashed looking spike. The pipe running from the lower part of the limb starts with an indentation almost like one of pipes as the queen alien's upper arm while the other pipe ends at the row of squarish holes similar to that found at the inner part of the elbow as if that had been observed and moved.

Their willingness to adapt the form would have basically meant that they would pick and choose what they wanted from it and reassemble it in a way that would serve them well rather than being anchored to the way Gleeson did it, but if one is looking, those shapes are there in different configurations which mostly escape my words. 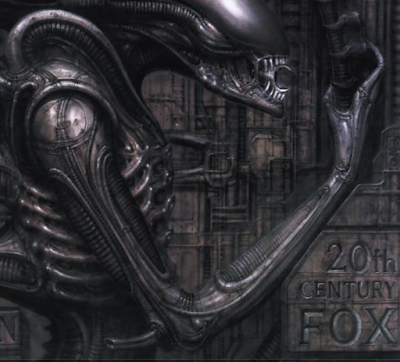 d) Final thought for the moment
This examination as with most things here seems to be based on conjecture, but it could easily seem as if Gleeson found itself incorporating elements of Giger's Alien's arm into The Judgement of Paris vi , and seeing the way that Giger's art has caught on in the public minds, people endlessly drawing details from his book or reimagining it completely without that much knowledge of where the seed of the idea came from.

Another example of this sort of things was indeed the fact Giger admitted himself after seeing The Empire Strikes back, without realising it found himself incorporating Darth Vader into one of his New York City paintings and later realised what it was. (See: HR Giger's N.Y. City XVII Crowley 1981 (work 467) (Darth Vader merged with Nommo archetype)

And perhaps something of what he has done has somehow been transmitted into the minds of the Alien Queen designers team in ways to be understood by quantum physics. Probably whatever Gleeson's relationship with Giger's style is, ghost words from the Aliens design team ought to be yelling out from across the decades "Cut this man some slack!"