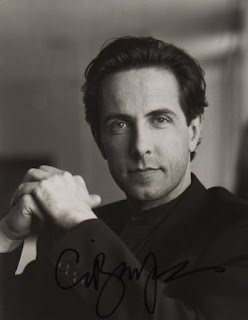 a) In talks about scriptwriting Alien 3
Before Clive Barker had released Hellraiser which came out in 1987, he had several meetings with David Giler in London and LA where they talked about Alien 3, the idea was that he would write the script and perhaps direct, he was also approached about continuing the Friday The Thirteenth series. At the time Clive was busy and was not so happy about dealing with someone else's aesthetic picking up someone else's narrative. The parameters on originality were fairly strict. As much as he thought that Alien and Aliens were excellent films, he wanted what he did to come from him since what he did best was to imagine.

b) Clives problem with the aliens
A problem with the aliens that he could never get his head around was the fact that the aliens didn't seem terribly interesting to him. Essentially they were machines, albeit organic ones, they were a tribe of mute, instinct led devourers that were murderers and lived far too short a time and this was so very far from what he did with monsters in his stories and films.

c) Results of having turned it down
When he turned down the job of writing the screenplay for Alien III, Clive's agent went mad at him, and he had never seen an agent in such a state of mortal panic as when he said no. Presumably it would have brought Clive millions. Soon he and the agent parted company

d) View 1 on the resulting film
The resulting film was not something that he really liked very much. He met David Fincher to discuss the problems he had making the movie. The first thing was that so much emotional commitment was thrown out of the window because the little girl Newt and Michael Biehn's character Hicks were dead from the beginning of the film and he didn't want that to happen, because he wanted continuity, and he felt cheated being asked to begin again when he didn't want to.

e) View 2 on the resulting film
The other thing was that he didn't understand the metaphysics of the piece. All they had in the film was a colony of bald monk prisoners with some pseudo-religion which the audience was not given any real insight into. The idea of them having no guns, and no gadgets was interesting, but that too for Clive was never really developed, so he felt teased with possibilities.

f) View 3 on the resulting film
On top of that, he didn't know how a movie could be called 'Alien cubed' and just have one alien beast, after in the second movie, there was the mother alien with a "cavern" full of eggs and a whole army of these creatures. The threat seemed so minuscule, and he wanted a much more terrible threat than that.