leading from:
Alien: The Space Jockey's Story
and
Alien: The  Life Cycle Hieroglyphics

a) The original Space Jockey/Alien relationship
The Space Jockey's history begins with the basic idea that O'Bannon had in mind, which Scott wanted to include evidence of in a prognosis scene.

This involved the space jockey being an entity who landed on the planet in his ship and became infected by the spores in the pyramid.
He at the time had no relationship with the film's Alien other than to become its victim.

b) Starting the Hierogylphs
On 5th April 1978 Giger began the hieroglyphs, a photographs shows him during the painting of the Facehugger's spring tail as it sleeps in the egg,
At the time, the head would still be a space helmet and the image that we see of it is found in the Giger's Alien book,
It is a humanoid astronaut wearing a costume with biomechanic patterns.
Once he had designed both the derelict and the silo, both would have his biomechanic style and the astronaut in the hieroglyphs is also wearing a biomechanic suit.

c) Change in the Space Jockey / Alien's relationship
In Giger's Alien diaries, it appears to be around March that the merger between the derelict and the silo becomes apparent but in the Giger's Alien book, it was not until June that the derelict and the silo are combined.
The head of the anonymous astronaut victim in Alien Life Cycle Hieroglyphics had been changed at some point to resemble a member of the Space Jockey's race.
This image can be found in Scanlon and Gross 'The Book of Alien" and that is the way the painting is to be found today. 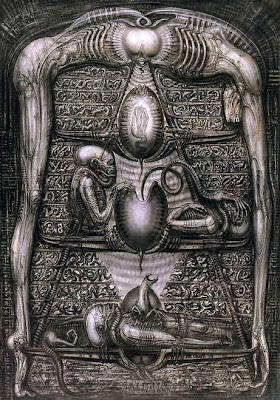 d) Giger interview confuses the issue or adds another
In 2004, it has been a few years now that the difference had been brought to the public about the difference between the two paintings.
However Giger when asked about this by the magaxine Dixieme Planete.
It's revealed in the interview about how he started off with a victim that looked like the alien and transformed it into human like victims to make the distinction.
It's not quite an answer that explains the paintings but then one might ask if Giger started off with an idea for a victim of the same species as the main alien of from the movie, changed it to a humanoid astronaut victim and then to a victim of the same species as the Space Jockey.
Posted by wmmvrrvrrmm