Michael Seymour: The first stage,
when it initially appears and leaps
from that sort of egg shape and plants
itself onto the face of a human, is a
curious, grasping , crablike sort of
hand creature. We called that first
stage the "Facehugger"
(American Cinematographer, August 1979, p805)


A big meeting took place, with Roger Dicken being told what the creature should look like and he had no idea what to make of it.

Finally Ridley Scott pulled out Giger's Necronomicon as a guidebook and he pointed out various parts that he liked.

Dan O'Bannon could see that Roger Dicken was very confused about the whole thing so he decided to ask Ridley if he could have a go at drawing the creature from the elements picked out.

Ridley said "go ahead" and so Dan went over to the art department with Roger Dicken, they took a drafting table and a huge piece of paper with some pencils.

He drew two heads on the paper and then opened Giger's book and put it down before them.

He said "Ridley wanted part of this body, right?" and he sketched it out, he drew the fingers that Ridley liked and he added the tail as well. 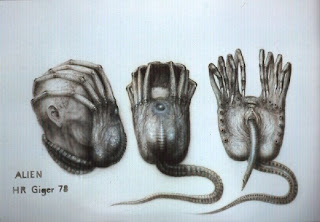 
As they put together the concept, Giger came in, his plane had arrived from Switzerland and he had with him the designs for the facehugger that he had been working on and they so happened to be similar to the designs that Dan had sketched with Roger.

Giger's version had an eye on the back, and looked more like the palm of a hand.

Dan asked "should I continue with it" and Giger replied "Oh yes", so the drawing that would replace Giger's concept went on.


Dan O'Bannon said to Ron Cobb,  "Ron, can you help me out here. Just take a look, see how these fingers attach to the sides of the body of the thing, I say these fingers would continue into the body, there would be some kind of skeletal under structure under the skin, would, would you please sketch in how these fingers would connect to the skeletal under structure as it disappears into the body of the thing,"
He saw Ron as a genius at this sort of thing. Rong took a pencil, he looked at it for a minute and then said "well, let's see, if those fingers are attached here, then they would probably continue on in to the body, there would be a skeletal understructure like this and then over a space of a few minutes he then sketched the internal skeleton of the thing, and it worked, it looked right,"
Dan looked at what he did and responded " okay, that now looks plausible, the fingers now have a biologically realistic basis in the way they fit into the thing."
With that Dan finished the drawing having drawn it out in life size, rendered it very very carefully,
For Dan O'Bannon, now this design was some something eclectically constructed from what Ridley and Giger wanted with ideas from from Ron Cobb and Roger Dicken, ansd this is what he wanted
He detached the thing from the drawing table, and went for a walk to find Ridley.
At some point he managed to run the thing through the blueprint machine.
Finding Ridley, he held up the drawing before him.
Ridley said was  "okay, Facehugger." and looking at it he added " yes, good, that's fine "
Dan responded " This is good?"
Ridley replied "yeah"
Dan replied "good" and then took the drawing away delivering it to Roger Dicken.

Dan O'Bannon said to Roger Dicken "here is the design for the Facehugger, do it like this"
Roger Dicken was able to acknowledged that he was being given a drawing which came up from the design department was , which showed a head, with the face hugger in place and the tail wrapped around the neck.
The tail was moved simply with a wire, so one could thrash it about or pull it tighter around John Hurt's throat.

There were air bladders to make it breathe, and pistons which could move all the legs.

The armature had one removable leg at the front, for the sequence when they cut that leg open, which took a number of takes to get the acid just right,

Ridley wanted to fill the sacks on the side of the creature with slime, but he put it in the sacs and it clogged up the air tubes which made the sacs pulsate.

They used surgical jelly on the hugger to get the slimy gooey effects .
h) The creature with manila envelope coloured skin
After a few days down the line, Roger Dicken came up with a sculpture of the thing, sculpted in clay.
A cast was taken of it and a mould of it was done in foam rubber. It hadn't been painted yet and it was simply the colour of the foam rubber which was kind of the colour of a manilla envelope, which was close to the colour of human skin
Dan looked at it and up to that point, he was thinking that the alien would have a sort of lizard like colour, a dark greenish quality, but then again he looked at this Facehugger with the colour of human skin
Dan found himself saying "you know what, I had never seen a space alien which is the colour of human skin. Doing this is not only novel, it gives it added plausibility "
With that he went to tell Ridley when he looked at the thing. By then they had insertted a wire armature inside it so that it could be stood up and have its fingers wrapped around something, but there it was, the Facehugger with the colour of human skin.
He said to Ridley " why don't we not paint it. why don't we leave it like that, skin colour?"
Again Ridley liked the idea and went for it saying "Good"
i) Roger Dicken's own concept

Roger did have his own concept for a facehugger that would have been different and more in keeping with his own aesthetics as a monster maker.

He would have like to have made it a little more scaly and have little barbs like rose thorns on the leg and down the tail.

Since this creature was self preserving, he felt that you shouldn't be able to get hold of the creature.

He also felt that its skinny little fingers were far too delicate for something that had evolved such an extreme level of self-preservation and so would have like to have like there to have been barbed fingertips inside of smooth human type nails that they wanted.