leading from:
Prometheus - The Return of the Space Jockey

a)  DNA?
When the announcement came that the Alien Prequel had become a film production called Prometheus, Ridley was keen to emphasise that Alien fans would recognise strands of DNA from the Alien.  It became a term bandied around and perhaps Ridley probably wanted to confuse the newspapers, magazines and the public with this statement since no one could actually work out what he actually was referring , instead of telling directly what Prometheus had in common with Alien.
b) More confusion about DNA term
What exactly does DNA mean in this context. John August in his article "Writing from theme" on the internet talked about DNA in scriptwriting terms , referring viscerally to "core ideas". Damon Lindelof had been quoted using the term talking about his former TV show, Lost, saying that "Time travel has been in the show's DNA from the beginning." Syd Field also started talking about the structure of scriptwriting using DNA as a metaphor So it can be seen to be Hollywood Scriptwriter speak.


d) DNA Theme
DNA also is a main theme to be talked about in Prometheus as a story. The Engineer has created the strand of DNA that may lead to what we know of as humanity, and Lindelof decided that the punchline of Prometheus was that in the creature that we have seen as the alien with human traits, there is human DNA, but viewers of the original Alien may well have been through all of this before understanding that the Facehugger combined its own DNA with the human host, which was Kane, to created something that Ash the android referred to as Kane's son.
e)  DNA Homage to Giger's Alien
DNA becomes mentioned by Arthur Max in a conversation when Empire asks about the relief showing the Alien-esque creature in Prometheus when he says that it is the DNA homage to the Giger Alien creature.  Inside a chamber in the domed structure, the Prometheus crew find what appears to be an alter, which has as its centrepiece an arch shaped relief of a pointy-headed ideally Giger-esque creature which appears to have been crucified.

Arthur said how they look and speculate about it briefly but are unclear as to what it is. In the final movie, archeologist Charlie Holloway looks at is by himself, finds a curious transparent green egg shaped structure upon an altar before it and forced to leave early because of the news of an oncoming storm, he mumbles to himself nothing more than "This is just another tomb" 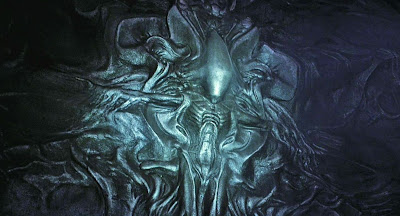 f)  Characters with shared DNA
DNA becomes used by Charlize Theron in discussion when she is talking about her character Vickers and it seems that the character David an android was created as a male version of her.


g) Finely stretched DNA
Two years later, it was Ridley was able to broaden his statement about DNA, in the fact that it was finely stretched and although he thought it would be much closer, it's now really a long way from the original alien. This really wasn't going to make him any more understood by those who really were not too happy to have this DNA talk fed to them