leading from
Prometheus: Afterthoughts
and
Prometheus: The Engineers
and
Alex Kzohanov : Gutalin


a) The face like that of Tron's MCP
The strange face of the The Master Control Program (or MCP) that was the main antogonist in the movie Tron, and it stand as a likely ancestor to Gutalin's face. If it had been a starting point, in terms of free creative explorations, it would have been very reasonable and the it would be silly to say that this had to only be this one thing but still the idea comes to the surface in a manner associate with another image from the world of cinema.

Back in 1982 when Tron came out, the digital wire mesh image of the face would have been fresh and new to the cinema going public who were excited to see what could be done with digital technology.

b) Who was the MCP?
The character was a rogue computer program, that ruled over the world inside ENCOM's mainframe computer system. During the rule of the MCP, many programs were enslaved and pitted against the program's henchmen, led by Commander Sark.


c) Placement in Prometheus
This face would have been featured at the back of the ampule chamber behind the giant head. Perhaps it would have been where the relief featuring an Alien or Deacon like creature posed in a cross form would be found. 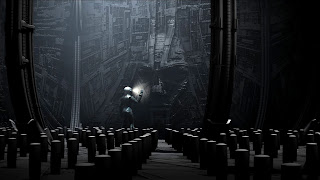 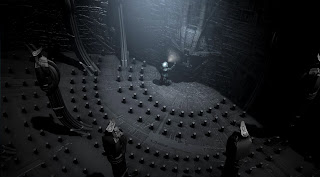 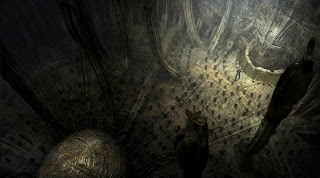 d) Philosophical viewpoints from merging Prometheus with Tron?
In view of the movie Tron Legacy with its darker design, one wonders what sort of comments might have been made by the public. Perhaps it might be seen as evidence of a fossilized cyberworld. (As I write, I suddenly want to merge the words Tron and Prometheus together in various ways.) It might have offered a different point of view about the idea that the Engineers being interplanetary visitors who from time to time over the millenias have come to Earth to give us upgrades as if they were giving us programming upgrades.

In terms of a post-Matrix (or a post-eXistenZ if you preferred David Cronenberg's virtual reality movie instead) way of thinking, we might as well be living in a computer generated program without realising it. In Matrix, there are those who are part of the program that, like gods, are controlling the human race. (see Max's Head Room)
Posted by wmmvrrvrrmm