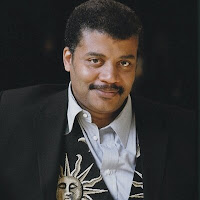 Neil deGrasse Tyson went to a midnight showing of Prometheus an twittered about it n 8th June 2012.
What he took home with him in a mental takeaway container from the film was that there were occasions when being curious is bad for your life expectancy.

b) Noticing Vickers lack of awareness of distance they travelled
As far as he could tell, the ship had gone three point two seven times ten to the fourteenth kilometres  and that meant near enough thirty five lightyears.
But he also took note of the gaff coming from Charlize Theron's character Vickers when she said "We're half a billion miles from Earth" which meant that they were just past Jupiter.
Why she had absolutely no understanding of how far away the ship was supposed to be seems to be a curious question.
(However those obsessed with the idea that the planetoid where part of Alien takes place orbits Zeta II Reticuli might think about how that star system is about 39 lightyears away)

c) Problem with seeding of life on Earth in Prometheus
But for him, the most unrealistic aspect of it is that it's a humanoid alien planting DNA seeds to seed all of life on Earth.
Of course, most life on Earth is not humanoid, and in fact most of it was plant and bacterial.
So for the sake of accuracy, he would rather have seen some kind of bacterium dropping its DNA into the oceans of Earth.
He thought about how there was the notion called Panspermia, that life might have begun on another planet and this microbial life would become a stowaway on rocks that would be cast back into space asteroid impacts.