Prometheus: Pile of engineer suits in the corridor


a) Discovery of pile of engineer suits
Lost in the maze like "Pyramid", the characters Fifield and Millburn encounter a pile of Engineer suits, they had seen holographic recordings of humanoids with these suits on running through the corridors earlier on.

What they wouldn't have known though was that these were actually suits worn by human like entities.

Presumably the engineers died in them and something burst out of the suits, if they were not simply discarded.

Within the darkness the two characters find suit remains piled up high and explore around the pile with a torchlight.

Millburn: It's those things, are they real?

Millburn: Jesus Christ, look at the pile. Look how high up thy are.

Fifield: It looks like they were running from something

Millburn: Don't touch, okay. This thing is opened up from the inside. Almost like it's exploded.

Fifield: It looks like some scene out of some sort of holocaust painting.

Millburn: And so whatever killed them is long gone


c)  Thinking back to the space jockey from Alien
One can go back to thinking about how the crew of the Nostromo assumed that something had burst out of the rib cage of the Space Jockey in the derelict ship and that that what we saw in the chair was an actual extra-terrestrial entity itself, which was indeed true until Ridley Scott decided that it was all just a suit including the skull and that something was inside. 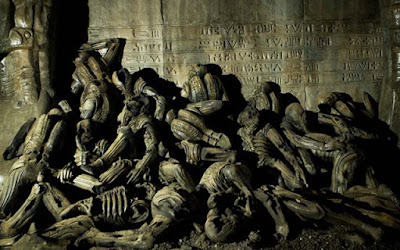