Leading from
Alien: Nostromo: The garage leading to the Claw room

a) Looking for an atmosphere in the leg room


At the beginning of the picture, Ridley Scott and Nicky Allder were talking about having fire and CO2 etc coming from the engines, but then it came to the point where they were filming the landing leg chamber, referred to at the Claw Room by Ridley and the leg locker by Allder.

When they were shooting the scene where Brett "gets it" in the chamber, Ridley was looking for a strange visual touch to enhance the atmosphere which also would lead to the idea of the engines for the Narcissus at the end of the movie).

They started out putting steam and smoke and various other things in the engine area and it wasn't quite right. So for no other reason that just to see what it would look like, Allder decided to try drops of water and Ridley responded "Yes, that's exactly what I want. "

So they had this gentle dripping coming down and during one of the shots Ridley seemed to pan the camera up into the roof and what would be seen were all these water droplets falling, very heavily back-lit and Allder found the effect to be very beautiful, but there was a big argument about the water drops in the room but Ridley stuck to his guns. 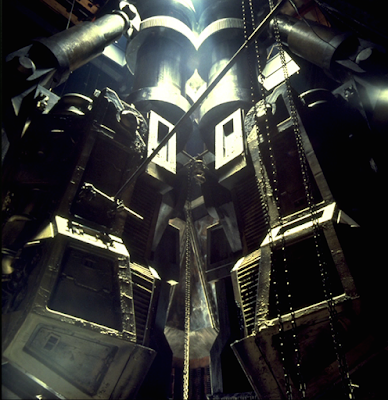 b) Questions about the falling water

The studio people were asking "how would you have water dripping inside this room?"

Ridley's response was "why not?"

They asked "Why the chains?"

Ridley responded "Well, the chains aren't very high-tech. yeah, you know what, you've still got to let things down, so it's still going to be rope or water, it's not necessarily electronic"

He had the chains dressed because the room looked a bit blank and he needed the movement in there.

Then they were asking "How's it moving?"

He responded "I don't care"

"Where's the water coming from? " they continued

The next question was "Why the condensation?"

Again Ridley must answer a question, "Because something's gone wrong in the ship's air conditioning and it's not life threatening, they'll put up with it"

Even Ivor Powell, near enough sci-fi grounded found himself asking Ridley "what-what-what's all this wet business, I mean, wha-what-what's the raison d'etre for it?"

And Ridley would respond "Oh no, it's great, you know."

Terry Rawlings as the film editor with a background in sound editing, loved the sound of the dripping water surrounding the viewer as if it were like entering a rain forest


This room was the landing leg room where the floor would open and the leg would go down and support the ship.

Brett knew that he was in trouble, but after all, the thing that he is looking for ought to be small, but of course it isn't

To get this reaction out of the cat, so next to Harry Dean Stanton, he had a German shepherd hidden behind a sheet of board on a leash, so obviously it couldn't get near the cat.

They raised the board and Ridley got the reaction he wanted. As if the cat went "What!"

It gets to the point where there's the sound of water landing on the peak of Brett's had and down his face, he's cooling off, and there's a long stretch that leads up to something.

The forty foot tall, left over from an earlier filmed landing seqence, has been hoisted a few feet off the stage and the chamber has been constructed around it.

To heighten its visual eeriness, criss-crossed shafts of light streamed through the overhead latticework and the water condensation trickled incessantly to the floor.

The landing leg itself becomes the idol that almost filled up the room but remained suspended in the air.

Ridley wanted to see the landing leg, the "claw" idol seen through the gap between the massive doors as big as the walls.

The "claw" would be so big that it almost touched the walls but was still hanging in the air.

He also mentioned Heath Robinson in his comparison, an artist who drew cartoons featuring unlikely machines, and so his name entered the language as a description of any unnecessarily complex and implausible contraption.

f) Connection with another temple environment

As it happens, the derelict space craft is also a temple in this way, with the space jockey as a central idol (which becomes interesting in view that the Space Jockey chair and occupant are inspired by the Henu Barque which would have taken central place in its own chapel) and becomes connected to the claw room temple by a piece of music played in both environments.

g) Brett gets it

They were quite limited in what they could do with the alien.

At one point, the script called for it to run up and down the corridors like a human being: but when they got the finished costume, they stayed late one evening  at the end of a day's shooting - just to see what it looked like in the sets and to shoot a few tests.

And of course, they found it would look ridiculous to see this thing running around - it would give the whole thing away immediately.

So when they came to film that actual death of Brett, Ridley brought Nicky Allder onto the stage and said to him " I want Brett to get it now, but I don't just want the creature to dart out and menace him to start with. I'd rather have it reach out and sort of caress his head - almost kind of inquisitive at first. Then you see it squeeze up, and the blood starts running down Brett's face, and it cracks his head open."

So they ended up doing this virtually on the spur of the moment. They ran blood tubes into Harry Dean Stanton's cap and through his hair, and the blood ran out and down his face.

The cat is peering around the corner and going backwards, and then suddenly the alien is descending.

The thing now is in its mature form, transformed beyond recognition to a large seven foot engine of destruction.

Ridley wanted the creature to be be perched on one of the ship's retractable landing legs. To maintain the gravity defiant position, Bolaji was suspended on a wire rig.

Ridley brought the creature in upside down and what it was at first was a tale coming down behind his back and then a jellified almost aspic like forehead, Brett turns around.

The articulated tail, which was to slide between Brett's legs and hoist him up, had to be operated by overhead wires since its internal cable mechanism was not altogether succesful
(See :The Alien's Tail )

The alien's head was seen as something beautiful in a streamlined way, and Brett doesn't know what he is looking at, and suddenly it comes up, its face is seen, the famous mouth opens up, the viewers would know that Brett was in real trouble and death occurs.

Harry Dean Stanton felt that he screwed up this scene because he could never play terror.

He knew how to laugh, how to cry and do everything else but playing terror.

It would happen later that he would understand that rather than look scared, he should just look as if he had not seen anything like whatever it was before.

Since the scene called for Brett to be swept from his feet and carried up into the tower, a separate harness had to be employed for harry Dean Stanton as well

Parker and Ripley would have rushed in but somehow it seemed too normal and Ridley decides to leave Brett to die in a lonely fashion and then they would come to the discussion in the room. The cat would have been the only witness.

Originally the scene where Brett was killed was longer and there was the rain in the falling water.
Because the stuntman had his arms outstretchced, it looked as if the creature was on a cross hanging up but couldn't be seen properly because he was diffused by the falling water.
They were saying to Terry, "take it out because you're giving it away"

But Terry responded "No one's going to know what they're looking at 'cause you've never seen it , "

When Sigourney saw the death of Brett, she thought that the scene showed the creature as something more than a destructive force.

What she liked about the scene was how the alien comes down with these beautiful gestures and looks at him, puts out its hands and holds his face.

Brett suddenly gets afraid and then alien strikes.

She got the impression that in the first shot we see of the alien it appears to be investigating this human, and she liked that idea.
It seemed as if she was getting what Ridley was driving at with the scene.
However it was somewhat misleading because in view of the cocoon scene which she knew about, the alien quickly made up its mind that the Nostromo crew are there to be transformed