Prometheus: The 'Space Jockey As A Suit' question

Leading from
Prometheus afterthoughts
and
Alien: The end of the line and back to the distant past

See: Prometheus: Aliens in suits that look like aliens

b) Ancient Aliens in Tintin
The presence of suits or statues along a spaceship hallway and a giant head in Pometheus appeared to be like elements from "The Adventures of Tintin and the Flight 714" which was a story that borrowed ideas from the ancient alien theory that was showing its head around the 1970s. However there wouldn't be any doubt that the statues were merely statues, but the endless questions about them being statues of extra-terrestrial visitors from an advanced spacefaring culture would not go away. Often they would be perceived to be perhaps somehow human relatives of our own who have interbred with humans on earth and perhaps even seeded life on Earth.

See: Prometheus : Traces of "The Adventures of Tintin and the Flight 714"? 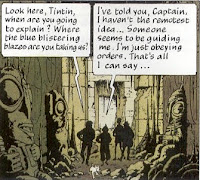 d) The Thing presented an alien life form replicating the forms of other life forms and hiding within these recognisable life forms, that crashed its spaceship on Planet Earth in ancient times.
See: The Thing (1982) (Still to come)

e) The reptilian visitors disguised as humans in V.

See: Patrice Garcia's  concept for a Mondoshawan from Luc Besson's The Fifth Element (1992)

i) "Fire in the Sky" alien suits
"Fire in the Sky" decided to make these outer bodies of aliens to be hard space suits for the creatures with another alien being inside who could discard the suit.

k) Prometheus' engineer flight suits
In Prometheus (2012) we find Alien suits standing in the corridor of the Juggernaut ship, that echoed both "The Adventures of Tintin and the Flight 714" and also Fire In he Sky